I have always been interested in nuts, bolts and mechanisms. That has progressed from Erector sets and Lincoln Logs, to chemistry sets and microscopes, and ultimately to computational models. So when I think about inflammation and disease, I think in terms of how molecules

interact to produce the symptoms of disease. I seek the molecular basis of inflammation, and how proteins and small molecules interact to make people sick. In most of the interactions that I study, that means how proteins bind to carbohydrates, e.g. heparin, and how alkaloids, e.g. curcumin from turmeric, disrupt those interactions.

Enzymes bind to sugars and catalyze particular biochemical changes in the sugars through amino acids on the surface of the enzyme. Examination of the surface of the enzyme would show pits or clefts with exposed tryptophan residues. The tryptophan does not hydrogen bond with water, i.e. it is hydrophobic. Similarly the top and bottom faces of sugar, such as glucose, are hydrophobic. If a sugar crashes into a tryptophan, as a result of thermal motion, the sugar will stick, because exposing the hydrophobic of both surfaces to water is a higher energy state; the sugar is bonded to the tryptophan. 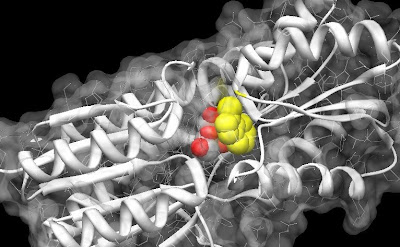 I have taken a mathematical model of a sugar-binding protein and highlighted the surface of the protein, the helical twists of the protein backbone, the yellow tryptophan and the red and white sugar. You can see that the faces of the sugar and the tryptophan are touching. 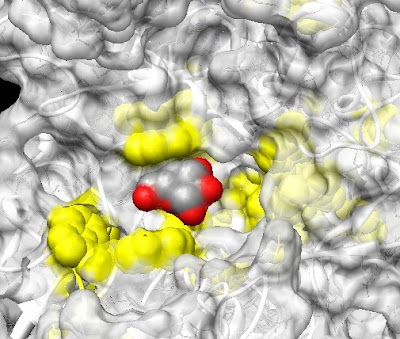 I have explored hundreds of protein structures derived by X-ray crystallography and NMR. Sugar-binding enzymes, such as glycosidases, glycanases, lectins, etc., usually have tryptophans to bind the sugars. Examination of enzymes that bind long chains of sugars have a series of tryptophan stepping stones that are spaced and oriented to bind the faces of the sugars. 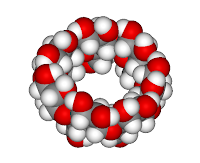 Some of the structures that molecules display are just amazing. Glucose chains are very long in the polysaccharides that we are familiar with as starch. Small lengths up to about a dozen sugars would be call dextrins. If these dextrins are connected en 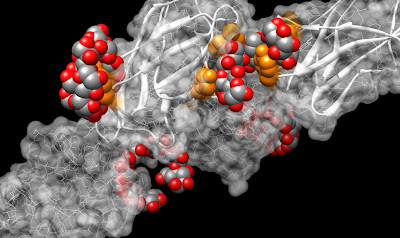 Cyclodextrins and short dextrins can also be visualized as they bind to an enzyme, amylase, that would normally hydrolyze starch to dextrins. I have highlighted the structures of an amylase mathematical model derived by X-ray crystalography, to show how the cyclodextrin on the upper left surrounds an aromatic amino acid (in this case tyrosine) and the dextrin binds to a series of aromatic amino acids in the enzymes active site with several orange tyrosines to the right. 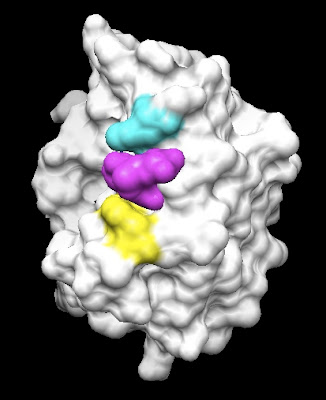 Sugars and tryptophans also bind to the hydrophobic arms of the basic amino acids, arginine and lysine. I have illustrated this in the case of a disaccharide bound between tryptophan (yellow) and arginine (blue) in the binding site of a lectin, a protein that binds to specific sugars.

Polysaccharide, such as heparin, that have bulky hydrogen-bonding sulfates bound to one face can still bind a tryptophan to unobstructed faces, and a basic amino acid to the other face. The basic amino acids bind in a two step process. The positively charged nitrogen at the end of the amino acid first binds to the negatively charged oxygens of the sulfates and then subsequently the nitrogen forms hydrogen bonds with the sulfates and hydrophobic interactions as the arm of the amino acid lies across the surface of the sugar.

Alkaloids, aromatic molecules with positively charged nitrogens and other negatively charged plant molecules interact with the aromatic amino acids and polysaccharides and alter human physiology. Berberine, from Barberries, has been used to treat arthritis, but it also binds and makes heparin fluorescent. Thus, berberine can be used as a fluorescent dye to visualize mast cells, which are the source of heparin. I have used berberine to stain heparan sulfate proteoglycans on cartilage producing chondrocytes in cell culture. Quinine is also similar in structure to berberine and college students should know that quinine in tonic water fluoresces in black light (UV). Putting the two together, I successfully stained my chondrocytes with tonic water!

The significance of these investigations is the potential to explain how traditional herbal remedies work and to develop new approaches for the prevention and treatment of inflammation based diseases.
at 5:13 PM

Dr. Ayers. I have suffered from a strange form or photosensitivity for about 10+ years. I'm especially reactive in UV light in doors but also outdoors, even with computer screens and tvs. It feels like a prickly swelling burn is how I can best describe, like an inflammation. It seems to come and go. I recently bought some trypto for depression and not sure if it's that or the fact that I'm seriously reducing my caloric intake but my skin barely reacted today. I was almost in shock. I also have been taking for several months, vit c, alpha lip, gaba, vit e, selenium, q10, paba, lysine, vinegar, cinnmaon, - some of these will give relief some make inflammation worse when exposed to light so have to take at night. I would really really love to know how to cure this once and for all. do you have any insight for complete remission?

Anonymous,
Your condition sounds like porphyria or perhaps systemic lupus. These are severe conditions that need medical supervision.

My general impression is that a condition that persists even when a healthy anti-inflammatory diet, such as I describe on this site, is followed and healthy gut flora has been developed, requires medical examination.

A tiny percentage of people have genetic conditions that can't be overcome with simple dietary adjustments.

Thanks Dr. Ayers for your quick reply! I was tested for Lupus antibodies a few years ago and it came back negative but I was convinced that that was what it was. The doctor also determined it wasn't PLE. I looked into this condition called electromagnetic disorder and my symptoms were very similar. I will try your diet. Thanks again!

It's anon again. One quick question. I was doing really well today but after lunch decided to have some tea and about an hour later the burn set in. It was a hot tea (liptons). could tea possibly cause a reaction like that?

Anon,
That is starting to sound like a form of rosacea. Some people don't show flushing, because of their skin type.

I am not sure if you are saying tryptophan is an anti-inflammatory or an inflammatory agent? Dr. Ray Peat is highly against tryptophan supplementation due to it's inflammatory properties, but since I stopped taking it, I have had insomnia and borderline depression. Can you help clarify. Thanks. ~Marcy

Also, he suggests that tryptophan is a carcinogen. Here's the article http://raypeat.com/articles/aging/tryptophan-serotonin-aging.shtml tell me what you think. Thanks

I do not know about the carcinogen properties.

Hello, Dr. Ayers,
I just found your blog while researching the work of Dr. Ray Peat. The depth and range of information provided here is 'awesome, dude' as my surfer nephew would put it. Could you please comment a bit more on quinine and tonic water, and the possible benefits of same, especially where wear and tear/degenerative cartilage issues are involved. Also, to echo another poster here, tryptophan? inflammatory or anti-inflammatory? If the former, why is it so widely touted for aiding sleep? Thanks!

Hello Dr. Ayers,
Have you ever written anything on Sarcoidosis or an allergy to neurotoxins that causes muscle stiffness? I would be interested in reading anything that you have written on the topic.