One of my favorite chocolates is Truffettes de France. I tell myself that just one serving (1.5 oz) or five pieces will provide an excellent supplement to may daily plant anti-oxidants. I am almost tempted to consider it one of the five recommended servings of fruits and vegetables. Alas, examination of the ingredients lists palm oil first, sugar second and low fat cocoa third.

Palm oil is a story in itself. This oil is about half palmitic acid (C16), one third oleic (C18) and one tenth linoleic (C18). The soap made from palm oil was developed in the US by the Palmolive company. Notice the name, palm-olive, from the two prominent fatty acids, which are also named after their original sources, palm and olives. 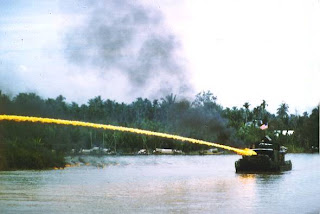 Another rather shocking use of palm oil is with naphthalene to produce a sticky flammable mixture called napalm.

Oil palms were brought to Malaysia from West Africa in the beginning of the 20th century.

When I stayed in Singapore in 1997 for a research sabbatical, the monsoon season was delayed so that the rainforests of Malaysia and Indonesia were drier than usual. Entrepreneurial plantation owners took advantage of the opportunity to send out thousands of workers to start fires. Fire is the tool used to clear forests and subsistence farmers from lands that cannot be used for profit, and to turn those cleared lands into plantations that use the landless as employees. The smoke was so thick throughout the whole region that street traffic in some areas of Malaysia and 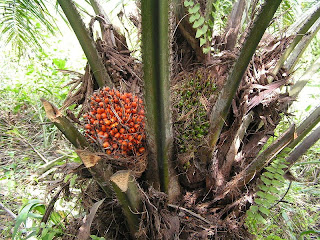 Indonesia had to be restricted for safety. I could see smoke even in the lecture halls at the National University of Singapore and my daughters had to check the smoke level outdoors before traveling to the university swimming pool. There were reports that birds fleeing the burning forests were lost at sea and took refuge on ships. Orangutans in Borneo Sumatran Tigers and the Asian rhinoceros are endangered by encroaching plantations.

My big worry about eating the delicious truffles is the linoleic acid. This shouldn’t be too much of a worry, even though it is an omega-6 fatty acid, because it is too short. Most vegetable fatty acids are shorter than the C20 needed to make inflammatory prostaglandins. The trouble is that short fatty acids can be elongated from 18 to 20 to 22 by cellular enzymes and omega-6 fatty acids block the elongation of omega-3 fatty acids. Omega-6 fatty acids that are heavily marketed by the US agribusiness industry, are essential in small amounts and a health risk when present in the diet in a higher ratio to omega-3 oils of greater than approximately three or four to one. The US diet is typically more than 10:1, highly inflammatory.

The single serving of five truffles contains about a gram, 1000 milligrams, of linoleic acid, so it will take about a single fish oil supplement capsule to balance that much omega-6 fatty acid. Maybe I will try to cut back to just a couple of truffles and eat more kale.
at 4:10 PM

I guess there are some chocolates out there that are actually good to eat. Personally I have made a decision to not eat any chocolate at all (I am not a big fan of the true dark one)

It wasn't even hard - when you know what these things are made of and really consider it, you just cannot look at them the same (at least I can't_

P.S. Love your research area of study (from a fellow biologist)

Dark chocolate without the fats manipulated has only about 3% omega-6 linoleic acid. So that isn't as bad. I think of chocolate as necessary to the quality of my life. I guess it is just lucky that it also provides a lot of health benefits as long as no milk products are mixed with it. Milk chocolate lacks health benefits and just becomes "empty" calories.
Thanks for looking in.

This article of yours got me thinking about Hearts of Palm. Have you come across those at all? Wikipedia has it down as "a vegetable harvested from the inner core and growing bud of certain palm trees".

I had a scan of its constituents over on nutritiondata.com and have provided the link below:

I noticed the Omega 6 to Omega 3 content was around 10:1 and that it was mildly inflammatory yet they have it as 5 stars for optimum health and 5 stars for weight loss?

Have you come across this foodstuff? Maybe tried it out?

Since it is a vegetable and 90% water and the rest is only 6% fat, the 6 to 3 ratio doesn't matter much. If it was an oil for cooking, then it would be too high in inflammation for my taste.
Most of the nutritional evaluations are outdated and are only based on saturated fats are bad and unsaturated are good. I would rate omega-6 very bad, saturated neutral, omega-3 short chain good, long chain very good. Corn, soy, safflower, are very bad. They are only used in the US and we have a big problem with inflammation here. Hmmm.
I think I had heart of palm once. Not memorable.