Plants attack pathogens, pests and herbivores with toxic chemicals, whereas snakes attack other animals with heparin-binding protein toxins. The rattlesnake toxin, crotamine is an example of a small peptide cross-linked by disulfide bonds, which attach to cells via heparin-binding domains.

I had a sabbatical in Singapore, at the National University. I was seated on the patio of the university canteen eating one of my typical lunches: curried mutton with hot lentils, rice and a durian milkshake, served on a banana leaf. I struck up a conversation with a biochemist who studied the structure and function of snake venom proteins. He was systematically analyzing the proteins in various venoms looking for proteins that interact with essential features of cells. This was a potential initial step for the design of new drugs. I remember asking him how he knew which part of the venom proteins was important and which parts just served as a rigid platform to display the active parts. He said that it was simple, the water-binding, hydrophilic amino acids that formed amorphous loops bordered by sulfhydryl-bonding cysteines were his targets. Ten years layer, I observed that these loops also have the basic amino acids (K, lysine and R, arginine) that form heparin-binding domains. 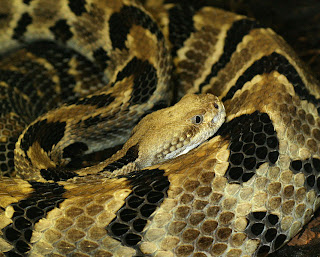 His conversation came back to me a couple of days ago when I ran across the structure and function of the crotamine toxin from the venom of the South American Rattlesnake, Crotalus durissus terrificus. 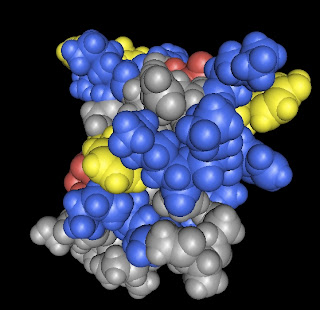 The heparin-binding domains were evident in both the amino acid sequence as well as the protein structure. As is true of many small proteins, or peptides, they are held in their functional shape by -SS-, disulfide bonds, between cysteines (C). The presence of two well-defined heparin-binding domains (blue) also predicts that the toxin would be anti-bacterial and that it would bind to phospholipids, i.e. membranes. The observed toxic quality of the toxin is its ability to disrupt ion transport through membranes and it has a shape similar to the mammalian anti-bacterial peptides, defensins. Most venom toxins bind to the heparan sulfate proteoglycans (HSPGs) of their victim's cells and then as the HSPGs are brought close to the cell surface during recycling, the toxins attack the membrane proteins and kill the cells.

I am tangentially interested in snake venom, because the proteins that mediate its toxic effects are related to the hormones that mediate inflammation.

It is interesting that a simple discussion over curried mutton ten years ago would be so consistent with a major shift in my research interests to study inflammation.
at 4:03 PM

Thought you would be interested in this short omega-3 video: http://www.youtube.com/watch?v=eIgNpsbvcVM

That video is great. It speaks to the omega-3 impact on brain development. That is a big push for the formula companies. Unfortunately they are deliberately avoiding the hundred other deficiencies in formula and the huge, destructive impact on gut flora and increase in baby inflammation.
Your book is helpful in getting the information on omega-3 oils in the public eye.
Thanks for checking out my blog.

Wondering if you have any insight into a case. 4 year old boy who was bitten by a diamond back rattle snake at age 2 1/2. He was recently hospitalized for inflammation of in his joints, fever, and pain. His pain level is now down, but his inflammatory markers and white blood cell count are still high. This inflammation seems to have been triggered by a virus. I think his bodies response of the inflammation has something to do with how his body dealt with the snake venom. Any ideas?
Thank you. Katie