Palmitoleic acid is responsible for keeping people healthy (lipokine) and for the smell of old people (nonenal). Overproduction of this lipid by blocking uptake of fats results in resistance to type II diabetes and atherosclerosis.

If you listen to the commercials on television, you know that there are two sources of fats/cholesterol; you either make it in your cells or take from your diet. Recent research shows that mice that have been genetically modified to lack cytoplasmic lipid carriers, can’t store dietary fat, so they make more of their own lipids. Specifically, they make more palmitoleic acid (C16:1n7). By U.S. standards, those defective mice are very healthy. It turns out that palmitoleic acid acts as a lipid hormone that communicates between fat tissue and other organs, and maintains a healthy metabolic balance.

Lipids are hydrophobic and require protein carriers to be moved from their source, such as the intestines, through the blood and to be offloaded into tissues. Most of the lipids enter the diet as triglycerides, i.e. a three carbon glycerol with three fatty acids attached. Those fats are extracted from food with bile, which is a mixture of modified cholesterol salts that acts as a detergent to dissolve fats. The dissolved fats, in the form of chylomicrons (big fat droplets coated with a lipid layer and proteins) are produced by intestinal cells and released into the blood stream. During transit, a lipase removes the fatty acids from the triglycerides. As in all of the lipid transport systems, the protein carriers determine how the lipid contents are distributed.

If a fatty acid or triglyceride is added to a cell membrane, the lipid would get stuck in the membrane's double layer of phospholipids. Fat droplets in cells are nothing more than fats that are loaded into the membrane of a cellular vesicle 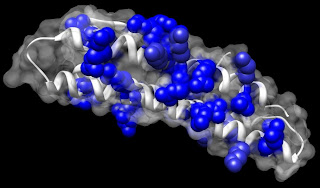 until a droplet covered by a half membrane forms. The alternatives for lipid transport are the HDL and LDL (protein coated lipids of the blood), and the intracellular fatty acid-binding proteins. The proteins bound to the surface of LDLs and HDLs bind to receptors on cell surfaces and control transfer of lipids to and from cells. One example is apolipoprotein E4. This protein is intimately involved in determining risk for athersclerosis and Alzheimer’s. ApoE4 binds to its cell surface receptor via heparin. Note the blue basic amino acids that form a massive heparin-binding domain down one side of the protein. 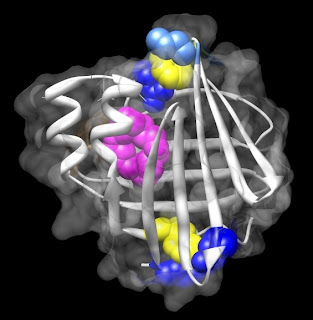 I have drawn the structure of a FABP using a graphics program called Chimera to visualize X-ray crystallographic data in the National Center for Biomedical Information (NCBI) database. The continuous chain of amino acids is shown as a white ribbon and the surface of the protein is shown as a transparent overlay. The protein chain makes a cage with the hydrophobic parts of the protein pointing toward the center to make a hydrophobic-lined container for the trapped fatty acid (pink). The two ends of the protein vessel are held closed by interdigitation of tryptophans (yellow) and basic amino acids (arginine and lysine, dark and light blue). The FABP also has a nuclear translocation signal, a group of four basic amino acids and other concentrations of basic amino acids displayed linearly across the surface of the cage (not shown), that probably are involved in transport of the trapped fatty acid from the cell surface to the surface of the nuclear envelope, which is involved in phospholipid assembly. 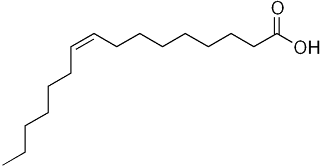 Mice engineered to have the human ApoE4 gene develop atherosclerosis and type II diabetes. If the FABPs of the fat cells of these mutant mice have also been removed, then the mice are essentially normal. Removal of the FABPs blocks the uptake of dietary fatty acids and stimulates the production of endogenous lipids, including the omega-7 fatty acid palmitoleic acid. This fatty acid is a lipid hormone, lipokine that stimulates normal metabolism and provides protection against several inflammation-based diseases.

Interestingly, palmitoleic acid accumulates abundantly in the skin of old people and is converted to nonenal that has the smell of old books.

Great post Dr. Ayers! FYI... Cardia 7 is the first supplement on the market with purified Omega 7 Palmitoleic Acid with virtually no Palmitic Acid -- More of the good and virtually none of the bad.

The book "The Art and Science of Low Carbohydrate Living" mentions Palmitoleic Acid as an early indicator of diabetes. They said the test is only available for researchers at this point but hopefully in the near future it will be available for clinicians as well. If you haven't read it I would recommend it.