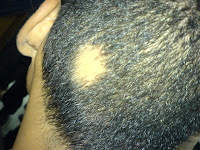 Celiac, Oxidative Stress, Peroxiredoxin, Alopecia
Grain/gluten intolerance, celiac is an immunological attack on the small intestines with increased risk for numerous autoimmune diseases.  Hashimoto’s thyroiditis is a common sequela of celiac and the two diseases share the same autoantigen, tissue transglutaminase (tTG).  Thus, the development of celiac and the production of antibodies to the tTG produced in the intestines, results in a subsequent immunological attack on other tissues that produce lots of tTG, e.g. the thyroid.  Gluten intolerance, because of its attack on the intestines and the proximity of a major part of the immune system (GALT), may play a major role as the foundation for autoimmune diseases.
Gluten Intolerance First Step in Autoimmune Diseases
Celiac may also lead to herpatic lesions of the skin, dermatitis herpetiformis and loss of hair, alopecia.  In these cases, the autoantigen is peroxiredoxin, an enzyme that eliminates hydrogen peroxide produced as a result of accumulation of reactive oxygen species, e.g. superoxide, associated with inflammation.  Peroxiredoxin is also implicated as an autoantigen in periodontal disease, suggesting that celiac may also contribute to dental gum inflammation.
Peroxiredoxin 5 Gene Associated with Alopecia Risk
A recent study (see ref. below) of genes associated with alopecia identified genes involved in Treg and Th-17 development, as well as peroxiredoxin 5 as contributors.  As expected, several genes involved in antigen presentation (HLA-DRA, HLA-DQA)  were also identified.  Th-17 lymphocytes are involved in immune attacks on self tissue, i.e. autoimmune diseases, such as alopecia, in which hair follicles are attacked by the immune system.  Tregs control immune attacks on self tissues.  Peroxiredoxin is an autoantigen and is produced in elevated amounts around hair follicles attacked in alopecia.
Basic Amino Acids of Peroxiredoxin as Expected for Autoantigen
I checked the amino acid sequence of human peroxiredoxin 5 and found an alternative (-nrrlkrfsmv-) to the triplet of basic amino acids that I expect for an autoantigen.  In this case there are two adjacent pairs of basic amino acids (blue rr and kr) that I think precipitate immunological presentation of peroxiredoxin.  Peroxiredoxins are produced in response to oxidative stress at sites of  inflammation and the presence of celiac compromises the gut associated immune system (GALT) that provides Tregs to restrict autoimmunity, so celiac sets the stage for peroxiredoxin presentation to the immune system and for subsequent production of anti-peroxiredoxin antibodies, autoimmunity and destruction of hair follicles, alopecia.
Anti-Inflammatory Diet Should Avoid and Treat Autoimmunity
Control of autoimmune diseases mediated by peroxiredoxin should benefit from a reduction in the conditions that spawned the diseases:
Treatment would be supported by dietary changes:
Th-17 and Tregs in HIV Infections
Th-17 cells are also reduced by HIV infection, producing susceptibility to infection, but this infection should also reduce autoimmune disease.  The reduction in Th-17 also may be a consequence of problems in the GALT.  Therapy for HIV infection should also include diet considerations to increase Th-17 and also Tregs to reduce autoimmune diseases due to unbalanced Th-17.
ref.
Petukhova L, Duvic M, Hordinsky M, Norris D, Price V, Shimomura Y, Kim H, Singh P, Lee A, Chen WV, Meyer KC, Paus R, Jahoda CA, Amos CI, Gregersen PK, Christiano AM.  2010. Genome-wide association study in alopecia areata implicates both innate and adaptive immunity.  Nature. 466(7302):113-7.
at 2:15 PM 105 comments