Rosacea: Alzheimer’s of the Face

Is Rosacea Caused by Amyloid LL-37, as Alzheimer’s Is Caused by Anti-microbial Abeta?
A recent article in PLoS One (Thanks Daniel!) suggests that the amyloid beta (Abeta) proteins that aggregate to form fibrous plaques in the brain tissue of Alzheimer victims, function as typical defensive anti-microbial peptides (AMPs), similar to the LL-37 cathelicidin implicated in facial tissue in rosacea.  The structural and functional similarities of Abeta and LL-37 suggest to me that Alzheimer’s and rosacea may also be similar in initiation and treatment.  Let’s compare amyloids and AMPs.

[The figure shows a model protein (from ref.) used to examine stain binding to amyloids.  The stains appear to bind to aromatic amino acids spaced evenly between adjacent proteins, but adjacent basic amino acids (blue) are spaced the same way and provide sites for heparin binding.]

Amyloid beta is the well-known source of the fibrous plaques forming brain lesions in Alzheimer’s disease.  The normal function of Abeta has not been firmly established.  The recent article shows data to support Abeta as an anti-microbial peptide comparable to LL-37 against several pathogenic bacteria and yeast.  Knock-out mice deprived of a gene corresponding to Abeta are susceptible to bacterial infections.  The anti-microbial activity present in extracts from Alzheimer’s disease brains was inactivated by anti-Abeta antibodies.

The similarities between AMPs and amyloid peptides suggest some implications for both Alzheimer’s disease and rosacea.  Vitamin D is a hormone that binds to a cytoplasmic receptor and the vitD/receptor complex then acts as a transcription factor that controls the expression of defensins in the intestines, LL-37 in facial skin and perhaps Abeta in brains.

Amyloids form fibers on a scaffolding of heparan sulfate (HS).  There is usually an excess of HS on the surface of cells and the HS is rapidly recycled back into cells.  During inflammation, mast cells release heparin, short fragments of HS, that should also inhibit amyloid fiber formation on HS.   Chronic inflammation, however, reduces HS production and may set the stage for amyloid fiber formation.  HS metabolism of the brain may be vitally important to the development of Alzheimer’s disease, especially since the increasing chronic inflammation of aging people should deplete brain HS.

LL-37 forms complexes with DNA from damaged host cells in rosacea skin.  The LL-37/DNA complexes trigger TLRs and inflammation.  LL-37 may normally bind to cell surface HS and chronic inflammation of the skin may cause the shift to pathogenic autoinflammation.  Topical application or perhaps low dose IV heparin may be effective in disrupting the autoinflammation due to LL-37.  Part of the toxicity of LL-37 in the skin may be due to amyloid like structures that could form with inadequate HS and overabundant LL-37 production.  Vitamin D metabolism should also be very important, since LL-37 synthesis is controlled by vitamin D.  This is consistent with the benefits that some rosaceans observe with high doses of vitamin D3 supplements. 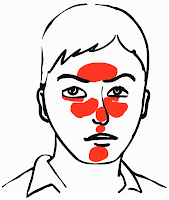 In previous articles, I have emphasized the mediation of extracellular signaling by heparan sulfate proteoglycans (HSPGs, polysaccharides attached to proteins) and heparin (HS fragments, oligosaccharides) and the sensitivity of HSPG expression and HS degradation by inflammation.  I return to that subject, spurred on by reading two articles that together show both the significance of heparin-mediated growth factors in general and in the specific case of symptom development in rosacea.

FGF Receptor Inhibitors Cause Symptoms Like Rosacea
Fibroblast growth factors stimulate the development of cancers, and antibodies against FGF receptors block cancer growth (see ref.)  FGF receptor inhibiting antibodies are now being used to stop cancers.  Unfortunately,  FGFR antibodies (e.g. cetuximab, panitumumab) also cause symptoms in the skin (telangiectasia, acneiform eruption) similar to the facial inflammation of rosacea.  Similarly, in knock-out mice, that lack the ability to produce FGFR, there are related symptoms.  It appears that lack of some FGF signaling may produce the symptoms of visible blood vessels and pus-filled (though lacking bacteria) follicles of rosacea.

FGF Mediated by HSPG
FGF binds to the heparan sulfate of membrane bound HSPG in pairs and these FGF dimer/heparan sulfate complexes activate a pair of FGF receptors.  The result is activation of protein phosphorylation activity (tyrosine kinase) and normal skin development.  HSPG synthesis is modified by inflammation and heparanase activity is increased.  This suggests that inflammation will decrease FGF signaling and could lead to symptoms of rosacea.

Rosacea Results from Inflammation and Aberrant Vascularization
Rosacea is poorly understood and is probably numerous diseases that have related symptoms and complex development.  As I indicated in previous articles, neurotransmitters from stimulated facial nerves, enzymes (kallikrein) and cytokines from intestinal interactions with gut flora, mast cell products (heparin, protease) and modified antimicrobial peptides (cathelicidins), as well as cryptic bacteria in facial tissues, may all be involved.  Inflammation in the skin of the face and in the intestines is involved.  Vitamin D, omega-3 fatty acids and anti-oxidants have a variety of responses (sometimes paradoxical) that differ from individual to individual and at different stages in the development of the disease.  Facial inflammation leads to abnormal development of blood vessels (telangiectasia) and in accumulation of lymphocytes and neutrophils (papulopustular rosacea).

Facial Inflammation May Depress HSPG Production and Disrupt FGF Function
One of the key ramifications of persistent facial inflammation may be the depletion of of HSPGs that normally coat cells.  HSPGs are continually produced, reabsorbed and degraded.  The half-life for HSPGs, even those that surround the cells that produce cartilage in connective tissue, is six hours.  HSPGs are also the source of heparin, that is produced as a counter ion bound to histamine and proteases in the secretory granules released by activated mast cells.  Thus, inflammation-based depression of HSPG production, which is also accompanied by heparanase activation, will remove the HSPG coating of cells.  This HSPG coating is needed for normal growth factor function.  Lack of an HSPG matrix on the surface of cells will also result in the migration of growth factors away from where they are normally functional and into adjacent tissue where they may stimulate aberrant development of blood vessels.  This may explain telangiectasia.

Is Topical Heparin a Rosacea Treatment?
Topical heparin does penetrate the skin.  It would appear to be a logical treatment, if HSPG depletion is contributing to symptom development in rosacea.  The length of the heparin fragments may be important.  I am unaware if anyone has tried the heparin lotions that are available for treatment of wounds to minimize scarring, on rosacea.  Heparin may be useful in combination with vitamin D3 and remediation of gut flora in a general scheme to treat rosacea.

Thousands of Species, Millions of Genes

A research paper in this week's Nature shows a major advance in the study of the role of the human gut flora in disease and health.  Metagenomics of the Human Intestinal Tract (MetaHIT) Consortium examined the role of gut flora in health by a massive project (ref. below) to determine the DNA base sequence of the majority of the millions of genes in the thousands of species of bacteria that abide in human feces.  Gut flora have been linked to many human diseases, as well as the normal function of the human immune system. DNA samples from each individual were fragments (<800 bp) and amplified to include indexing information and sequencing primers.  The sequences of a dozen of the fragments at a time was determined using a dozen different dyes (Illumina multiplexing).  Sample preparation and analysis was fully automated to permit identification of overlapping contiguous sequences and assembly of bacterial genomes (1,000-1,150 most common).  The sequence data in this study represents most of the bacterial species of the gut.

The new study represented more than 200 times the sequence information than in all previous studies combined.  Existing genome sequences could be identified among the bacterial genomes assembled from the new data.  The identified and sequenced bacterial species represent approximately a tenth of the common bacteria in the gut.

Genes coding for enzymes needed to metabolize pectin, sorbitol, mannose, fructose, cellulose and sucrose, were common among the gut flora.  Bacteriophages were also significantly (5%) represented in the total gut metagenome.  Most of the genes were assigned recognizable bacterial functions, but many genes, presumably involved in interactions among the bacterial community or in modification of gut function have not been characterized.

The bacterial gene compostion of individuals diagnosed with Crohn’s Disease and ulcerative colitis were different and distinct from healthy individuals.  Individuals with Crohn’s disease had 25% fewer species of gut flora than comparable healthy controls.

This study demonstrates the feasibility of using current techniques to examine in detail the interactions between gut flora and tissues of the gut that are involved in health and disease.  This also suggests the risks of antibiotics in altering critical functions of the gut flora, as well as the alteration of gut flora to support health and cure disease.