Why Discuss Mother’s Milk on an Inflammation Blog?

Milk Is Perfectly Adapted for Infant Nutrition/Development
I think that I should explain, if it is not obvious, why I keep bringing up breastfeeding/infant nutrition on this blog about diet, inflammation and disease.  The starting point is that infants need nutrition, protection from disease and continued normal development or they won’t be able to reproduce.  That means that milk is the focal point of a lot of natural selection and absence of the natural functions of milk, e.g. use of formula, would be expected to lead to inflammation and disease, which it does.  Analysis of milk and how formula makes infants susceptible to disease and alters normal development, provides an extreme example of the interactions of diet, gut flora and the immune system.
Since this is World Breastfeeding Week and my wife is an Internationally Board Certified Lactation Consultant, I think that writing a few articles on milk is good for my health.
Milk Provides Complete Nutrition, Controls Gut Flora, Promotes Gut Development -- Formula Doesn’t
I find it amazing that supplements are encouraged for exclusively breastfeeding infants.  It doesn’t make sense to suspect that breast milk is inadequate and why is formula fortified with ingredients at ten to a hundred times the levels in breast milk?  The answer is in the infant gut flora and perhaps in poor maternal nutrition/gut flora.
Mother’s Milk Promotes Normal Infant Gut Flora -- Bifidobacteria 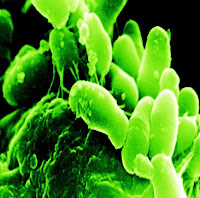 The normal infant gut flora is very simple, Bifidobacteria.  Adults have gut flora composed of hundreds of different species of bacteria and infants have just Bifidobacteria.  The name of the infant bacterium should be familiar if you read labels on yogurt.  Bifidobacteria are common probiotics.  That also explains why the diapers of exclusively breast fed babies smell like yogurt.
Formula Promotes Adult Gut Flora
One bottle of formula kills the Bifidobacteria and replaces it with adult gut bacteria.  The diapers are forever changed, because the adult gut flora is very persistent.  The presence of the adult gut flora also explains why formula has the high levels of supplements.  The adult gut flora consumes the supplements and leaves only tiny amounts for the infant.  All of the breast milk nutrients go to the baby if only Bifidobacteria is present, but after the adult gut flora are established much higher levels are needed and the infant may still be deficient.  Adult, formula-supported gut flora also digest antibodies and other protective factors in mother’s milk.
Supplement Mothers to Improve Infant Nutrition
Modern mothers are also eating modern diets that produce deficiencies.  Chronic diet-based inflammation leads to a compromised ability to produce vitamin D in sunlight.  Nursing mothers with poor diets may not be transferring enough vitamin D to their nursing babies.  Since formula and the adult gut flora that it stimulates, causes gut inflammation, I suspect that formula fed infants are also compromised in their ability to produce their own vitamin D in sunlight.  It makes more sense to supplement mothers than babies.
Formula Is not Breast Milk, It’s Not Even Close
Formula is cheap to produce, but expensive to buy.  Formula is promoted as the next best substitute for milk from a baby’s own mother, but that isn’t true either.  The next best alternative is mother’s milk from a certified human milk bank.  It is available at a reasonable cost.  Hospitals should know better and provide the only appropriate alternative.  Early formula use dramatically increases healthcare costs.
Formula Lacks the Oligosaccharides Needed to Support only Bifidobacter
Fructose oligosaccharides (FOS) and other short chains of sugars are being promoted to support the growth of beneficial gut flora.  These oligosaccharides do promote the growth of adult gut flora, but not just infant Bifidobacteria.  Formula plus FOS and/or other prebiotic oligosaccharides other than those present in human milk support the growth of bacteria that rob nutrients from and degrade the protective components of breast milk.  If the diaper smells like adult gut flora, then the baby was not fed mother’s milk.
Development of Gut and Brain
The newborn gut and brain are only partially developed.  Mother’s milk is needed to supply growth factors to close and differentiate the gut epithelium, and long chain omega-3 fatty acids for brain growth.  Formula may eventually be supplemented with the needed fatty acids, but the growth factors/hormones present in mother’s milk will not be provided in formula.  Recent studies have shown that hundreds of different genes are activated in gut cells from infants fed either breast milk or formula.  Formula leaves the gut leaky and fails to stimulate the development of the immune system that is dependent on interaction with normal infant gut flora.  These dysfunctions partially explain the increased (10X to 100X) gut and respiratory infections resulting from formula use.  The reduced brain development with formula explains the five point reduction in IQ of formula fed infants.
It’s worldwide breastfeeding week.  Support healthy, non-inflammatory gut flora (infant Bifidobacteria) around the globe!
at 3:02 PM 200 comments