There is increasing evidence that many, if not all, chronic degenerative and autoimmune diseases have a bacterial component and that antibiotics may be much more broadly useful.

Antibiotics are fed to children with ear infections, fed to cattle to fatten them, sprayed on apple orchards to stop fireblight and used to treat AIDS patients with nuisance to nasty infections. Bacteria are in many ways better adapted for exploiting nutrients than plants or animals, but antibiotics level the playing field.

Fungi have the same problems with bacteria stealing their food and they have adapted their biochemistry to kill off competing bacteria with their antibiotics, while they digest the world around them with enzymes. Thus, the classic antibiotic, penicillin, is made by a green mold and this antibiotic kills bacteria by mimicking one of the ingredients used to make bacterial walls -- the unsuspecting bacterium incorporates the penicillin into its wall and the compromised wall stretches apart. Bacteria grow themselves to death in the presence of penicillin. 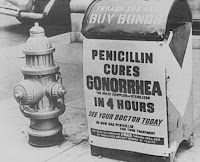 Use of antibiotics is problematical, because most of our bacteria are necessary for our health. Antibiotics kill a substantial fraction of the beneficial bacteria that live in and on us, and leave us exposed to opportunistic pathogens and parasites. Everyone is familiar with yeast infections following a course of antibiotics and the rapid acquisition of hospital strains of antibiotic resistant bacteria.

Another problem with antibiotics is that they fail to reach every nook and cranny of the body. Sinuses, for example, provide vast distances that separate bacteria from the blood stream. Similarly, pieces of metal that pierce cartilage can produce bacterial infections that can’t be reached by antibiotics, because cartilage inhibits capillary production, so their is no blood circulation to carry the antibiotics to the bacteria. In the same way, the depletion of capillaries in the extremities of diabetics with poorly controlled blood sugar, makes infections difficult to treat with antibiotics.

Even under the best of conditions it is difficult for antibiotics to reach lethal concentrations for resident bacteria and biofilms make survival of bacteria certain. Bacteria have adapted to the hostile environment of human tissue by making structured colonies. The outer layers of bacteria are sacrificed to spare the inner, proliferating bacteria. Bacterial biofilms are highly resistant to antibiotics and to attack by the cellular defenses of the immune system. Unfortunately the bacteria in biofilms, and in other forms adapted to human tissue and have a different metabolism and stain differently from the same bacteria grown on laboratory agar plates. Thus, it is quite possible for pathogenic bacteria to be undetectable and fail to be associated with a particular disease.

Bacteria may avoid scrutiny by pathologists, but they cannot fail to release cell wall fragments and debris, which triggers inflammation and other responses from the surrounding tissue. Numerous researchers have implicated mycobacteria, chlamydia and many other bacteria as causal agents of degenerative and autoimmune diseases -- there is a distinct correspondence between inflammatory diseases and these bacterially-associated diseases. There are also recent patents supported by provocative experimental data, that claim that aggressive antibiotic treatments (usually supported by anti-inflammatory lifestyles and diets) can cure these diseases.

I expect that antibiotic cures for many degenerative and chronic diseases will be demonstrated with a huge accompanying upheaval of traditional medicine. There will be, and there has been for the last century, substantial resistance to antibacterial approaches. Even though Helicobacter pylori was implicated as the causal agent of ulcers, antacids and blockers of acid production persist as the predominant treatment. The role of bacteria in chronic disease will be substantiated, but for me the lingering question will be, “where are the bacteria that are being treated?” I still think that the best candidate is the gut. Afterall, the gut is the body’s major interface with the outside world and there is a compelling research literature on the impact of gut flora on health and disease.
at 3:41 PM