Dr. Oz has complained several times about his constipation and the pain he feels in his shoulders during surgery.  He has recommended numerous treatments.  Since I feel a friendly affection toward Mehmet after talking/shouting at his image on the screen for hours, I think that I should give him some advice to relieve his pain.

Hot, Cold, Topical Treatments Are Effective, but Don’t Penetrate Themselves
Dr. Oz keeps talking about how various topical applications penetrate the skin.  He has even recommended the use of an electrical system to carry pain relieving steroids into his tissue by what looks to be electrophoresis.  This is dubious.  I would recommend that he stick to the topical chemicals, e.g. capsaicin, menthol, that target the hot and cold sensors of the superficial layers of the skin and result in deep penetrating nerve signals that trigger anti-inflammatory responses in the underlying bursa.

Constipation Is Caused by Damaged Gut Flora or Dysbiosis
Dr. Oz, like most physicians, does not usually explain the causes of diseases, such as bursitis.  Unfortunately, when he tries to explain problems, such as constipation, he overlooks important aspects of the problem for a facile physical model.  In the case of bursitis, it is important to realize that the patient, Dr. Oz, is also constipated.  Constipation can be aggravated by dehydration or “holding it”, but in Dr. Oz’s case, the combination of bursitis, an autoimmune disease, with constipation (and gas) suggests the more complete explanation of dysbiosis or damaged gut flora.  Dysbiosis is what causes constipation, because bowel stools, poop, is mostly packed, hydrated bacteria that grow in the colon by digesting soluble fiber.  If you eat an apple a day, there is enough pectin and other plant polysaccharides, i.e. soluble fiber, to increase the volume of the stools to make one regular.  [Don’t be confused by the misconception promoted by Dr. Oz that the volume of stools results from insoluble fiber, such as in whole grains.  The husk part of whole grains is useless or unhealthy and grains in general are not needed for a healthy diet.] 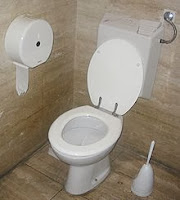 Dr. Oz’s constipation suggests a damaged gut flora.  Since he is a physician, one would suspect that he has used antibiotics in the past few years and wiped out essential types of gut bacteria.  Dr. Oz probably followed his own advice and attempted to patch up his damaged gut flora with probiotics.  Unfortunately, as I have repeatedly explained, dairy probiotics don’t survive in the gut and cannot repair damaged gut flora.  But Dr. Oz is even harder on his gut flora.  He has recommended the use of colloidal silver throat spray when he has been exposed contagious germs.  Silver, although ineffective for its intended use, is very toxic to gut flora after it is swallowed.  Dr. Oz also subscribes to numerous approaches to house and body hygiene, which are probably occupational hazards for surgeons.  Hygiene is the enemy when it comes to ingesting bacteria lost to antibiotics.  The atomizing flush toilet is my gut flora hero for spreading contagious health.

Damaged Gut Flora = Damaged Immune System
Constipation is bad enough, but damaged gut flora can mean that some of the bacteria needed for the gut-based development of cells regulatory T-cells (Tregs) that keep the immune system under control, are missing.  Constipation can lead to deficient Tregs and that means a major predisposition to autoimmune disease and allergies.  [Fecal transplants cure autoimmune diseases and allergies.]  Antibiotics, silver, hygiene excesses and constipation suggest to me that Dr. Oz has been cruising toward some rude immunological sequelae.

Autoimmunity Results From Antibiotics, Dysbiosis and Compromised Tregs
Autoimmune diseases result when a trifecta of inflammation, compromised Tregs and appropriate antigens occurs.  Normally physical damage, such as abusive shoulder exercise, results in inflammation as the first step in healing.  The inflammation can rev up the immune cells in the local area of tissue damage and some of the proteins, such as lubricin, which lubricates the bursa, may have basic triplet amino acid sequences that lead to presentation to immune system cells.  But no antibodies against self tissues are produced, because the Tregs stop the process.  Healthy gut flora produce healthy Tregs and block autoimmunity.

Dr. Oz abuses his shoulder bursa during surgery, but it can’t heal properly, because he has damaged his gut flora and compromised his Tregs.  The result is the autoimmune bursitis from which he now suffers.  He can reduce the symptoms and inflammation with topical anti-inflammatory natural chemicals, but he needs to repair his gut flora to repair his Tregs and reduce autoimmunity.  In the mean time, he is contaminating his local environment, family and friends with his unhealthy bacteria.  I wonder if Dr. Oz’s friend, Dr. Mike Roizen also suffers from autoimmune diseases?

KEEP YOUR TOOTH BRUSH NEAR THE OPEN TOILET 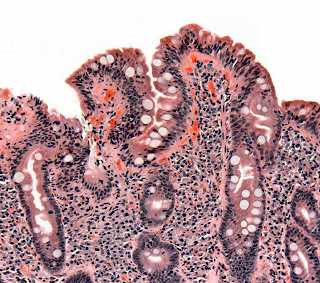