Hormones are a form of molecular communication between cells in different locations in the body connected by the blood stream. 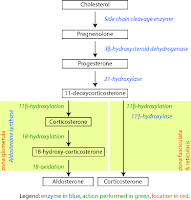 Cells, for example in the pituitary of the brain, receive a nerve or chemical signal and respond by the secretion of a steroid hormone that changes the behavior of cells in other parts of the body. Steroid hormones are produced enzymatically in mitochondria by the enzymes (P450) related to those used to detoxify dietary molecules.

Steroid hormones are useful for transmitting messages, because when they stick to the surface of a protein, they can make it change shape. The shape change is the result of the hybrid structure of steroids -- they are large flat molecules that don’t bind to water, i.e. hydrophobic, on their faces, but form bonds with water, i.e. hydrophilic, on the edges. This dual, amphipathic, nature means that the steroids will bind to hydrophobic pits in proteins and as the steroid squeezes into the pits, it will change the shape and ultimately the activity of the protein. Sugars, on the other hand, have small rings of carbon atoms that are hydrophobic, but their small size means that they bind to small aromatic amino acid residues in shallow surface pits that don’t usually change the shape of the proteins. Hence, there aren’t sugar-responsive transcription factors, but large, highly charged polysaccharides, such as heparan sulfate proteoglycans, can dominate the structures taken by proteins, e.g. most protein hormones and their receptors.

Steroid hormone receptors are cytoplasmic, whereas receptors for proteins hormones, such as insulin, are found on the surface of cytoplasmic membranes. It is commonly assumed that steroid hormones, because of their amphipathic characteristics, can diffuse through cytoplasmic membrane and move directly from blood to the cytoplasm of cells. I doubt the evidence and think that diffusion is too slow to account for the action of steroid hormones. It is more likely that steroid hormones bind to carrier proteins in the blood, and general transporters transfer the steroids either directly from their carriers to intracellular receptors (testosterone, estrogen, corticosteroids) or the carriers are transported all the way to the nucleus for transfer of the steroids to nuclear receptors (vitamin D, vitamin A, retinoic acid). Binding of the steroids to cytoplasmic receptors displaces chaperones (heat shock proteins) and expose nuclear localization receptors (groups of basic amino acids that would function as heparin-binding domains, if the proteins ever found themselves in the extracellular environment) that result in transport into the nucleus.

Receptors with bound steroids act as transcription factors in the nucleus -- they bind to unique DNA sequences and control gene expression. Thus, anti-inflammatory steroids can block the signaling via NFkB from a bacterial infection (LPS triggering the TLR) by directly interfering with transcription (binding to inhibitory control elements) of inflammatory genes. The presence of estrogen receptors in a wide variety of tissues provides an overall decrease in inflammation in the presence of estrogen. Thus, women going through menopause and reduction in estrogen, may experience a sudden increase in inflammation-based symptoms that were previously suppressed by anti-inflammatory estrogen.
at 3:09 PM