Baby formula is called, in the medical profession, an artificial milk substitute. It is made of highly processed food additives, and all of these additives are prone to contamination. The recent melamine scare is just the most recent example of dangerous contamination. 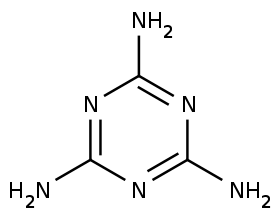 When you look at the structure of melamine, you see a lot of nitrogen atoms, and since protein is frequently measured in food products by measuring nitrogen content, melamine mimics protein. Since protein is expensive and melamine is cheap, people can make money by diluting protein solutions, such as milk, and adding melamine to make it look as if it has the normal protein composition. In China, that little bit of subterfuge resulted in the hospitalization of thousands of children. Melamine may act like protein in simple nitrogen assays, but the body doesn’t have enzymes to react with it or transport proteins to excrete it. Melamine forms crystals, blocks kidneys and kills small people.

The newest threat is based on the report of a trace amount of melamine in formula in the US. It is hard to determine how the melamine got into the formula, because formula is made of dozens of highly processed and synthetic ingredients. Production of this artificial milk substitute from so many different sources has resulted in dozens, if not hundreds of contamination incidents.

Formula is a gut flora disrupter. In contrast to the trend toward prebiotics to support healthy anti-inflammatory probiotic bacteria in the gut, research shows that even a single feeding of formula will shift the gut flora of a newborn to an inflammatory composition. Gut inflammation, along with delayed intestinal development and absence of breast milk’s immunity enhancers, are considered to be the reasons why formula lowers intelligence (5-10 IQ pts.) and increases the incidence of allergic, autoimmune and infectious disease. Formula can be tolerated by babies in developed countries, because of the high hygiene. Formula use in developing countries is unsafe. In fact even though there is a small risk of transfer of HIV from an HIV positive mother to baby by nursing, it is safer for HIV positive mothers to breastfeed in some countries than to use formula.

The presence of melamine in formula would result in the introduction of a toxic compound into a immune compromised baby. It is very important to test formula very carefully for even seemingly innocuous contaminants. Breastfed babies would be protected from melamine even if the mother ingests melamine-contaminated food, because toxins, including most pharmaceuticals, are not passed into breast milk. Breast milk is the anti-inflammatory diet for babies and should be encouraged at least until solid food is started after the emergence of two teeth, top and bottom. The American Academy of Family Practice Physicians recommends breastfeeding for at least two years with exclusive breastfeeding (no formula or solid food) for the first six months. The worldwide average weaning age is 4 years.
at 12:52 PM