Some polysaccharides are only digested by the action of colon bacteria. Some of these fiberous plant polysaccharides (and associated macromolecules, such as lignan) are inso 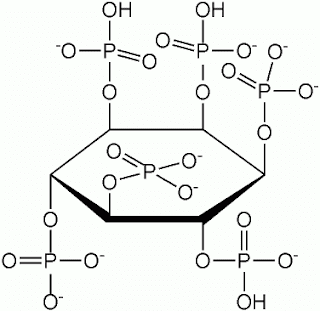 luble, whereas the soluble fiber is made of beta-glucans. Insoluble fiber also contains the active ingredient, phytic acid (inositol hexasulfate).

Fiber stimulates the passage of ingested material through the colon, i.e. it has a laxative effect. Growth of beneficial (probiotic) bacteria are enhanced by fiber. Beta-glucans also enhance immune function and have been reported to inhibit tumor expansion and enhance resistance to some bacterial infections, e.g. anthrax.

My personal experience with fiber components began with my graduate research. I ended up determining the structure of the beta-glucans from fungi that trigger the disease resistance of plants. Other researchers soon found that the beta-glucans also triggered the immune system of crayfish and it wasn’t long before beta-glucans were recognized as the active ingredients of a number of foods associated with reduction in diseases.

More recently, I began using yeast beta-glucan to stimulate inflammation in my study of rat chondrocyte cultures. It appears that these glucans are recognized by a cell surface receptor and trigger NFkB-mediated expression of typical inflammatory genes, COX-2, iNOS, IL-1, IL-6, TNF, etc. This form of inflammation also reduces the expression of heparan sulfate proteoglycans.

Beta-glucan-stimulated inflammation may also enhance infiltration of tissue with neutrophils and other leukocytes that provide cellular immunity against some tumors.

Immunity may also be altered by the impact of soluble and insoluble fiber on the bacteria of the gut. Fructose oligosaccharide, such as those in milk, enhance the growth of lactobacilli that are anti-inflammatory. Soluble and insoluble beta-glucans are also prebiotic. The prebiotic effects on the gut flora may be partially responsible for the enhanced resistance to infectious bacteria resulting from ingestion of soluble beta-glucans.

I encountered another activity of fiber in my work on heparin and inflammation. Heparin is derived from a polysaccharide made from glucose and glucosamine. Several enzymes add sulfates and the heavily sulfated, negatively charged fragments, oligosaccharides are secreted from mast cells as heparin. 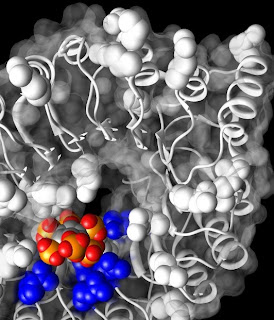 Other negatively charged polysaccharides, e.g. nucleic acids and sugars also have some of the properties of heparin. One of these molecules that mimics heparin is inositol hexaphospate, phytate. As I pursued the binding of tryptophan and related structures to proteins, I remembered a similar molecule, auxin or indole-acetic acid, from my plant work and examined an auxin receptor. I was pleasantly shocked when I looked at the 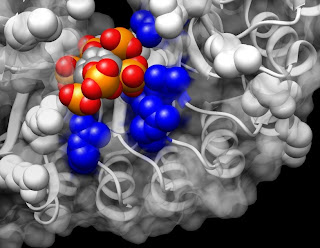 auxin receptor sequence. I expected to find that a heparin-binding domain was used to bind auxin to this protein receptor. That proved to be the case and substantiated the generalized observation that tryptophan and similar molecules bind to basic amino acids, and that sugars also bind to both aromatic and basic amino acids. What was amazing about the auxin receptor was that the purified and crystalized protein had a phytate bound to an assortment of basic amino acids in the center of its structure.

I have illustrated the structure of the auxin receptor here to show how the blue arginines extend as inward pointing spokes from a wheel of alpha-helices, and the orange/red sulfates of the phytate attach to the arginines. Only the lower right quarter of the image is shown in the closeup, with the whole molecule shown in the smaller picture.

Phytate is important, because it holds much of the phosphate content of the fiber, and the binding of divalent cations, e.g. calcium, magnesium, to the phytate may prevent these minerals from being absorbed. In ruminants, e.g. cattle, the gut bacteria produce and enzyme, phytase, that removes the phosphates and solves the absorption problem. This is frequently not the case in humans.

Inositol with two or more phosphates is attached to the lipids of membranes to make phospholipids. Signal cascades may activate enzymes that release the inositol phosphates (IP3) into the cytoplasm where they can cause the elevation of cytoplasmic calcium and the release of secretory granule contents, e.g. neurotransmitters.

Phytate is considered to be responsible for the reduction in colon cancer attributed to fiber from grains and legumes. The heparin-mimicking actions are probably the basis for its activity, since phytate can partially replace or inhibit surface receptor interactions that normally involve heparan sulfate proteoglycans. Phytate can also be internalized along with heparin and it should be very aggressive if released into the cytoplasm.

Phytate has been found to be very safe, but may be more effective if ingested in the soluble form, since it is frequently not released from fiber. Extensive cooking is required to release phytate from insoluble fiber. Soybeans are one of the best sources of phytate, so maybe it would be wise to cook some for hours just to release the phytate.
at 4:52 PM

So what is the point, and where can we buy this phytate without boing beans for hours and if you boil the beans do you eat the beans or drink the water??

I was trying to explain how fiber works and also show that many of its effects have little to do with the indigestible material and more to do with the attached phytate.
You can look up the uses of phytate as a supplement by doing a Google search under phytate, phytic acid, inositol hexaphosphate or IP6. As I indicated, it should have numerous unpredictable interactions on the signaling systems of the gut and on the gut flora.
After extensive cooking of soybeans, I would expect the phytate to be released into the water. It would make sense to drink the water on an empty stomach, so that it doesn't just bind to the fiber again in your stomach.
Good luck.