Basic Triplets Only in Primate Forms and Allergens

I have examined the proteins, autoantigens, that are the focus of a dozen autoimmune diseases and a similar number of allergens. All of these proteins have basic triplets that I previously associated with heparin-binding. I have had two recent revelations. First, these triplets appear to not be involved with heparan sulfate proteoglycans for internalization. In fact, HSPGs don’t appear to be involved, even though the process is inhibited by heparin. So this suggests a transport system, perhaps using the LDL receptor or the mannose-6-phosphate receptor, (or a protein with an acidic triplet or quartet.)

The second interesting observation is that the mouse, cat, dog, etc. versions of the human autoantigens lack the basic triplets. This suggests that these diseases cannot occur in non-primates by the same mechanisms. So what is the role of these basic triplets in humans? They didn’t evolve to cause problems under unusual conditions of chronic inflammation, so what is their adaptive advantage?

I think that the answers to these questions could yield the identification of a fundamental cellular transport process and associated cellular phenomena that could be worth a Nobel prize in medicine and it could be unravelled by a group of high school kids doing some straightforward bioinformatics.

Oh. I just remembered that IL-1 beta, the inflammatory cytokine, has a basic triplet. I just checked NCBI, and that basic triplet is found in all of the mammalian IL-1 betas. Oddly, the soluble receptor for IL-1 beta has an acidic quartet. I looked up the protein structure of the IL-1 beta bound to the IL-1 receptor and did a quick illustration using Chimera: 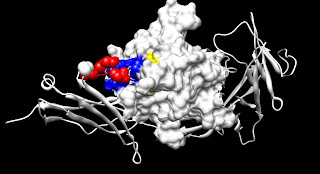 I put the surface on the IL-1 beta and left the IL-1R wrapping around it in as a ribbon. The basic triplet of IL-1 beta is in blue and the acidic quartet of the receptor is in red. One of the basic amino acids is stabilized by hydrophobic bonding over the face of a tyrosine, in yellow. Clearly, there is a simple ionic, plus-minus charge, bonding between the basic and acid amino acids. I don’t normally see this interaction between basic heparin-binding domains and other proteins. Other proteins that bind to heparin-binding domains use aromatic amino acids to make hydrophobic bonds with the hydrophobic arms of the basic amino acids, e.g. importin and nuclear localization signals or tryptophan/arginine ladders. The use of simple acid-base connections (with the projection of each stiffened by adjacent prolines) shows that this interaction is selected to be irreversible.

I don’t know all of the ramifications of basic triplets, but they are very important and are the basis for most modern allergic and autoimmune diseases.
at 2:13 PM