An Autoantigen for Pancreatitis

Pancreatitis is an inflammation of the pancreas resulting from lack of adequate inhibition of proteases. Autoantibodies against PSTI would explain some forms of pancreatitis. 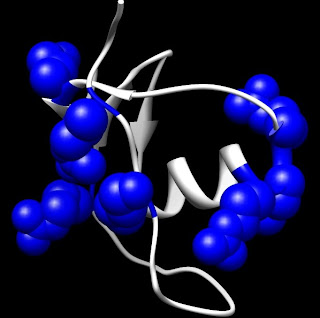 milk, when the reference discussed here was brought to my attention by my wife, who happens to be a lactation consultant. The paper showed that PSTI is present in colostrom, the first milk that a baby gets, before the true milk comes in. PSTI protects the new gut from digestion by its own pancreatic proteases, since PSTI is a protease inhibitor that sticks to the gut.

I naturally assumed that PSTI stuck to the gut by heparin-binding domains that would stick to the heparan sulfate proteoglycans on the gut surface. [Recall that it is via these HSPGs that viruses and bacteria infect the gut and the HSPGs in turn are protected during infections by the release of heparin from mast cells. The heparin in the guts of cattle and pigs are used to make commercial heparin to block blood clotting.] So I looked up the structure (above, with basic amino acids in blue and basic triplet on right) sequence of human PSTI at NCBI:

The basic triplet (RKR,arg-lys-arg), from my perspective, should result in presentation to the immune system during high levels of inflammation, and as a consequence result in autoantibodies against PSTI. The result would be the neutralization of the protease inhibitor and damaging production of active protease to attack the pancreas, i.e. pancreatitis.

It would be fairly easy to test this hypothesis by looking for the anti-PSTI antibodies in some people with pancreatitis. Other autoantibodies, e.g. against tissue transglutaminase, might also be checked, because the inflammation that produced one autoantibody may produce others and both PSTI and tTG are produced in the intestines. In fact, celiac may be the cause of some cases of autoimmune pancreatitis.

I just checked the literature on PubMed and found that PSTI is in fact an autoantigen in pancreatitis and produces antibodies against PSTI:
Raina A, Greer JB, Whitcomb DC. Serology in autoimmune pancreatitis. Minerva Gastroenterol Dietol. 2008 Dec;54(4):375-87.

Sorry to ask what is surely a very ignorant question here in this technical discussion, but for a lay person like me, do you and your wife have any insights on whether milk and dairy products are healthful foods for humans? I tend to think that dairy products are not good choices.

Jim,
I think that milk, that is commercial cow's milk, is naturally full of compounds that are active in protecting against pathogens and establishing a particular gut flora. Unfortunately the calf's gut is not the same as the human gut. It is possible that cow's milk may be supporting a change in gut flora that is not particularly healthy for most humans. It may, however, be an improvement for some people.

I would say that the long traditional use of fermented dairy products indicates that most are healthy. Butter, for example, has fats that are much safer than the typical vegetable oil, since milk is lower in inflammatory omega-6 oils.

Many proteins in milk produce an immune response in humans. This probably only occurs in individuals with high chronic inflammation and inflammatory gut flora. This is a problem with cow's milk-based formulas, Because formula is inflammatory and supports the development of lots of allergies.

Cow's milk should be ok, but with typical inflammatory diets, it may be a problem.

I hope that this vague answer is helpful.

Thanks for the questions.

Also, consider that most Western people consume commercial milk that is extremely processed and adulterated (though they don't realize it). Fat and fat soluble vitamins are removed; dry milk solids are added to improve "mouthfeel" and make up for the missing fat, but that makes the protein content too high; pasteurization (UHT especially) denatures destroys the probiotics and enzymes (lipase, lactase, and phosphatase especially) that facilitate digestion and nutrient absorption; etc. Commercial milk simply isn't the same food that some pastoral human societies traditionally consumed the past 10,000 years or so.

While I wouldn't ever argue that dairy is absolutely necessary for good health (clearly much of the human population did great without it), IF dairy is consumed, well-produced (on pasture, no CAFO-produced) raw or gently home-heated dairy foods (cow, goat, sheep milk, etc.) are a better choice than the conventional industrially processed dairy foods. Reports of food-borne illness from raw milk, while possible as with any food, are greatly over-hyped and extremely rare and localized (unlike illness from pasteurized dairy foods) if the milk is produced, handled, packaged, and stored with care.

Our family has been drinking raw milk (cow and goat) for nearly three years (and I make fresh cheeses and other cultured items with it, too). We would drop milk from our diets (probably not grass fed aged cheese, butter, and heavy cream, though) if we lost access to the raw milk. Our son never liked drinking milk anyway, until we made the switch to raw milk.

And I have met the owner and toured the pasture-based farm and creamery that produces our raw milk and am satisfied that he produces a safe and wholesome product. I find conventional dairies have a "lack of transparency issue" when it comes to questions about how their products are produced.

Anna,
You have brought up many of the real issues with using cow's milk as human food. And this just starts the very broad discussion of processed vs. slow food.

When I taught microbiology, I would demonstrate the antibacterial properties of raw cow's milk, by spiking it with E. coli and following the death of the bacteria by dilution and plating. Also, raw cow's milk is still used in some areas of the world to decontaminate pruning tools used in orchards to prevent the spread of viruses and bacteria.

Milk is very complex and there are new research initiatives to determine the molecular structures of the oligosaccharides present in human milk.

Thanks for your interesting comments.

In simple language, do you mean that use of cows milk can prevent pancreatitis?

I had a bout of acute pancreatitis about 5 months ago which was attributed to alcohol abuse.

My advice would be to shift to the anti-inflammtory diet that is recommended at the top of this page and reduce alcohol consumption.

Dr Ayers,
Thank you for your reply. You say "reduce" alcohol consumption and not "quit" drinking. Is it safe to drink alcohol in moderation - say 180 ml of whiskey in a week - after one has had an attack of acute pancreatitis? My gastroenterologist asked me to stop drinking completely because my pancreatitis has become sensitive to alcohol owing to the bout of pancreatitis I had.

I hope the following link will be of interest to you: http://www.breakthroughdigest.com/cancer-treatment/pancreatic-cancer/herbal-extract-proven-to-inhibit-the-development-of-pancreatic-cancer/

In the late 40's and 50's breast feeding was not promoted. How did those of us who received baby formula even survive? Are we more prone to pancreatitis, etc.?
I'm pretty sure the milk I received was pasteurized since Mom was extremely conventional.

Hi,
Took Onglyza off and on for a year. I  have an enlarged adrenal gland. Still I await the outcome of that CT, but I know that much. Will find out more.
I had the CT because of chronic pancreatic pain that started out as "attacks" from a couple of times a month to finally after 3 months of use without interruption, "attacks" 2-3 times a week. My PA put Onglyza on my allergies list.
In the meantime, I lost almost 50 lbs in 5 months due to illness. Loss of appetite, pancreatic pain, chronic diarrhea, then eventually, inability to move my bowels. Severe back pain from the pancreas, and severe chest pain sent me to the ER where I was worked up for cardiac pain. I was cardiac cleared, but told my amylase was very low.
Still seeking a diagnosis, but I lay the blame squarely on Onglyza. I'd had pancreatic issues in the past, and argued with the PA that prescribed it, she was calling me non-compliant, and I feared repercussion from my insurance company.
I even took an article about the dangers of Onglyza, particularly in patients with a history, and she made me feel foolish.
I wish I had listened to my instincts, I fear not only damage to my pancreas that is irreversible, but also severe damage to my left kidney, though I have bilateral kidney pain.
I was off all diabetes meds, and control sugars strictly low to no carb. I can barely eat anymore, I have severe anorexia.
I would warn anyone taking Onglyza to consider a change and try Dr Itua Herbal Medicine, and anyone considering taking it, to select a different avenue. I have been suffering severely for about 9 months, but the past 7 months have been good with the help of Dr Itua herbal medicine which I took for 4 weeks.
I have been off Onglyza now, for 7 months, and simply 100% improvement with the help of Dr Itua. I had none of these issues except a history of pancreatitis in my distant past.
I will recommend anyone here with health problem to contact Dr Itua on drituaherbalcenter@gmail.com and whatsapp +2348149277967 also he ccure the following disease with his herbal medicines Hiv/Aids,Herpes,Copd, Glaucoma, Cataracts,Macular degeneration,Cardiovascular disease,Lung disease, Enlarged prostate, Alzheimer's disease, Dementia. Fibroid,Diabete, Multiple Sclerosis, Hypertension,Fibromyalgia,Hiv, Hepatitis B, Liver/Kidney Inflammatory,parkinson,cancer,als.