Fat cells produce the hormone leptin. Early experiments showed that leptin could ameliorate some of the effects of mouse models of type I diabetes, but it was always thought that the leptin just improved the activity of the small residual amounts of insulin produced by the rats. A recent 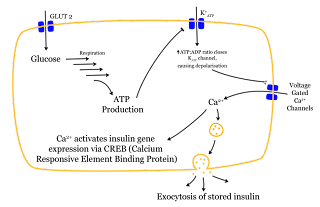 experiment with genetically insulin deficient NOD mice, shows that leptin expressed by a virus infection reverses the symptoms of diabetes.

The NOD mouse strain is defective in the hormone, IL-2, that preserves tolerance to self proteins. As a result, a high percentage of the NOD mice develop symptoms of type I diabetes melitis, high blood glucose and ketosis. These animals will die without injected insulin.

In recent experiments, the NOD mice showing symptoms of diabetes were injected with a strain of adenovirus that had been engineered to express leptin. The leptin-expressing NOD mice displayed a rapid reversal of diabetes symptoms and began to gain weight normally. The high blood sugar and ketosis in NOD mice was stimulated by glucagon release in response to lack of insulin. Leptin stopped the glucagon release and reduced additional production of glucose by the liver and lipid oxidation that yielded the ketosis.

Muscle access to glucose in the NOD mice was restored by leptin by the induction of insulin-like growth factor 1 and its receptor. The NOD + leptin mice had normal blood sugar, but ate half the normal amount and had no body fat.

These are very promising results for type I diabetics, because it indicates that insulin injections are not the only approach to treatment. Stimulation of leptin production may be very useful and this new approach is being intensely investigated.