Mycotoxins are among the most toxic natural products. They are fungal adaptations to enhance competition with bacteria and insects, but they can be very effective in injuring the nervous system and organs of humans and may result in persistent debilitating syndromes.

In retrospect, I must admit that I have spent much of my academic life working with lower life forms. When I entered graduate school in molecular biology, I was willing to work on anything, but fungi and plants. At that time, James Watson had claimed that only nucleic acids and proteins were worthy of study by molecular biologists, because that was the scope of The Central Dogma, DNA to RNA to protein. So of course, I ended up studying the carbohydrates (glucan elicitors) of fungal walls that are detected by plants to signal an infection. It was part of the molecular biology of host-pathogen interactions and of plant disease resistance. People now buy fungal/yeast glucans as supplements to enhance (read cause inflammation in) their immune systems. 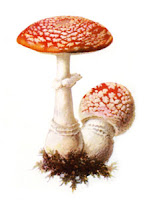 Turning on plant disease resistant reactions by pathogens or my glucan elicitor points out one of the most misunderstood aspects of plants -- they are dangerous! Afterall, most of the drugs and nasty compounds that are used come from plants. If you want to really make sure that a greenhouse is dead, dead, dead -- no insects at all, you can bring out the heavy guns and spray with nicotine. Nicotine is so nasty and deadly, that full body protection is needed for the sprayer. Just recall all of the nasty plant extracts that are used to kill people in murder mysteries. What could be more deadly that ricin from castor beans? Plants are not safe to touch, let alone eat -- they are full of compounds that kill or maim potential plant eaters and should never be trusted. Plants are more sensitive to my glucan elicitor than they are to their own plant hormones and their reaction is a slew of more toxins -- sick potatoes are a significant source of nasty compounds that cause birth defects. So, be careful eating sick plants, especially if you are pregnant and be even more careful feeding plants to unsuspecting pets.

While I am on the subject of pregnant women, we should spend a moment on morning sickness. The smell of cooking plants makes pregnant women, especially in the first trimester, evacuate their stomach, i.e. vomit. The point is that women have an important reflex to block them from eating food that will injure their developing fetus. During the first trimester, fetuses are very sensitive to plant compounds that cause disruption of development, teratogens. The pregnant woman’s sensory system associates smelling plant compounds with eating plants and eliminates potential teratogens in the stomach. Pregnant women would be well advised to avoid their veggies, especially early in pregnancy. Plants are not always healthfoods -- women store fat for a pregnancy to help them feed their fetus without the need to eat potentially dangerous food.

Fungi including those forming fruiting structures, such as mushrooms, eat by secreting enzymes and absorbing the digested products. They have to compete with bacteria for the fruits of their secretory labors, so they poison the competition with the cheapest toxins possible, i.e. small molecules with high toxicity. When I was gathering mushrooms in the verdant moss strewn forests on the islands of Stockholm’s archipelago, I picked only the ones that were friends and avoided their lethal brethren. The toxins are legion, including the “brain lesioning agent,” ibotenic acid of Amanita muscaria, that can also be used to kill flies, phalloidin from A. phalloides, that locks up the cytoskeleton and all of the recreational shrooms that bring California trippers to the microclimates of the Idaho hop yards. The sensory and nervous system of animals are high value targets for fungal toxins.

While in Missouri, studying bacterial plant pathogens, I befriended Art Karr, who was studying the most lethal of the mycotoxins, aflatoxin. He was using the fluorescence of the aflatoxins to permit their detection after thin layer chromatography. Subsequently, after I had moved to Harvard, I collaborated with Art to design a fluorescent immunological method using antibodies produced by Gerald Wogen, another collaborator from MIT, for the quantitation of aflatoxin in corn. The aflatoxin detection kits became the first product of our company, Vital Technologies, Inc. Measuring aflatoxin in corn was a big deal, because this mycotoxin was what stopped corn production in southern states of the US. and blocked many international shipments of corn. Aflatoxins also have been implicated in many peanut-based diseases/cancers in Africa and even in kwashiorkor, a wasting disease normally associated with malnutrition.

Sick building syndrome has been attributed in some cases to the house mold, Stachybotrys chartarum and its toxins. These macrocyclic trichothecene toxins cause diverse acute and chronic neurological symptoms and may contribute to such elusive diseases as chronic fatigue syndrome (CFS), multiple chemical sensitivity (MCS), fibromyalgia (FM) and post-traumatic stress disorder (PTSD). In each syndrome, an acute, stessful experience compromises the nervous and immune system, and subsequently a chronic phase persists.
at 4:32 PM

I have long beem curious of the below premise, and perhaps you can help? Do you think mycotoxins could be the secret cause of gluten allergies? Seems to me that from an evolutionary biological standpoint that gluten allergies makes little sense, but mycotoxin contamination makes all the sense in the world, resulting in the rampant gluten allerties we seem to be seeing. What do you think?

Anon,
Gluten intolerance explains the problem with grain in our diet, because we produce antibodies to both the major protein in wheat gluten, gliadin, as well as to the enzyme transglutaminase, that our bodies produce to inactivate the long stretches of the amino acid glutamine that are unique to gliadin. This is not to say that other toxic components in corn couldn't contribute to the inflammatory environment of the gut that promotes gluten intolerance.

There are very minimal amounts of mytotoxins now in commercial grains, since those grains, such as corn are also fed to livestock. Growth rates of chickens are monitored very closely, so the presence of mycotoxins is readily evident.

The increase in gluten intolerance is most likely due to the shift in our diets away from saturated fats to inflammatory vegetable oils and the increasing use of inflammatory fructose in the form of high fructose corn syrup, sucrose and fruit juices. Inflammation also reduces vitamin D production and increasing vitamin D deficiencies are also inflammatory. High starch diets also contribute to inflammation. Chronic diet-based inflammation is the foundation of allergies, disruption of gut flora and autoimmune diseases.

I found this post amusing because my first trimester with my son, the only nasuea I experienced was with veggies. Just the thought of a salad made me sick. Then I spent the rest of my pregnancy craving spicy food and anything with hot peppers. My son, at a very early age has loved spices, so we blame it on his tastes. He is an extremely picky eater but is always wanting us to dump spices into his little hand so he can eat them.