Amyloid proteins form fibers as they systematically stack in the presence of heparin. Examples of amyloids are the beta-amyloid and tau of Alzheimer’s disease, prions, and perhaps even sickle cell anemia fibers.

Amyloids are proteins that stack into fibers and can be detected microscopically by binding particular stains, e.g. Congo Red. All of the amyloid proteins are also heparin binding, e.g. Alzheimer’s amyloid is 50% heparin sulfate. I surmise that the Congo Red

is binding to the heparin-binding domains, because Congo Red also binds to cellulose and a particular lipopolysaccharide from Shigella flexneri. Antibodies and enzymes that bind to polysaccharides, bind through tryptophan residues that are flat, hydrophobic plates with regular spacing. The amyloid fibers presumably bind the broadly spaced hydrophobic surfaces of Congo Red by providing corresponding complementary hydrophobic regions of the basic amino acids that are grouped on the stacked amyloids.

The interactions between carbohydrates, even highly charged polysaccharides such as heparin, and hydrophobic conjugated ring systems of aromatic molecules, such as dyes (Congo Red, Berberine) or aromatic a 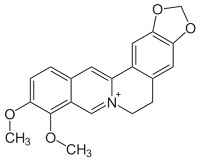 mino acids (phenylalanine, tyrosine or tryptophan) may seem counterintuitive. The ring structures of sugars are actually hydrophobic on the relatively flat surfaces, surrounded by the hydrophobic edges of the hydroxyl groups. Tryptophans are amino acid-two ring systems that are the typical binding surfaces for sugars. The large, negatively charged sulfate groups on heparin sugar units limit the binding of aromatics, such as the dyes berberin or alcian blue to just one side of the units. Proteins bind to heparin by a combination of the positive charged at the ends

The cooperative of action of heparin in the form 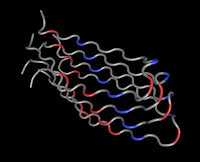 ation of beta-amyloid, and many 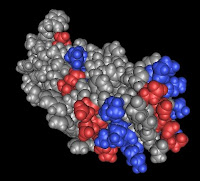 other experimental protein fibers has been thoroughly studied. Tau protein also forms intraneuronal fibers in Alzheimer’s, but a facilitating polysaccharide has not yet been identified. I have examined the protein sequence of the human tau protein and identified numerous heparin-binding domains. Also the X-ray crystallographic structure of tau has not be determined, because tau is considered an intrinsically unstructured protein. Many proteins with multiple heparin-binding domains are unstructured, because these proteins only reach a stable structure when they are bound to heparin. It is not likely that heparin is intracellular in healthy neurons, so either the integrity of neurons with tau fibers has been corrupted and heparin has entered, or the fiber enhancing molecule is a nucleic acid, e.g. RNA. There aren’t many other choices.

Knowledge of the rapid cycling properties of heparin may explain the toxic properties of amyloids. Amyloids are toxic when they are in contact with the cytoplasmic membrane surface. The contact toxicity is consistent with the amyloid fibers interacting with the heparan sulfate proteoglycans (HSPGs) embedded in the cytoplasmic membrane. It is known that HSPGs rapidly cycle between secretion and uptake. Both heparin and proteins with strong heparin-binding domains, e.g. protamine, HIV tat protein, are rapidly internalized. It is possible that amyloids bind to the uptake system, but the large size of the fibers blocks their internalization and paralyzes the uptake system. Paralysis of the membrane functions may lead to death of the neuron. Prions also appear to form amyloids with heparin and may be toxic for the same reason.

An analogous amyloid process leads to the death of the insulin-secreting beta cells of the pancreas, leading to type I diabetes. Insulin is made by chopping the middle and ends off of a pre-protein. The middle section that is excised has a strong heparin binding, internalization domain, so if insulin processing is blocked, is this the basis for autoimmunity in the presence of inflammation? Antibodies against the beta-cells keep killing them and maintaining the requirement for supplemental insulin. I think that aggressive anti-inflammatory treatment and blocking of the offending antibodies (or induction of tolerance) could permit the beta-cells to recover.

Structures displayed were captured from NCBI MMDB using CN3D.
at 12:30 AM

Some researchers refer to Alzheimer's as Type 3 Diabetes (http://health.dailynewscentral.com/content/view/0001969/53/).

That seems to agree with your theories on the molecular level. Interesting stuff.