Tissue transglutaminase (tTG or TG2) is produced in excess in some diseases, such as cystic fibrosis, and contributes to inflammation and disease symptoms. tTG also readily moves in and out of cells by virtue of its basic triplet and when in the cytoplasm, tTG is ubiquinated and degraded by proteosomes. I have previously pointed out that internalization and proteosome degradation are also the initial steps in processing of proteins for presentation by the immune system and antibody production, i.e. turning a cellular protein into an autoantigen involved in autoimmune disease. 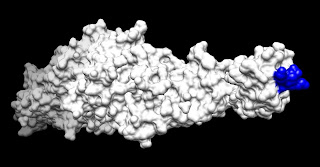 Here is an image of a computational protein model of tTG I drew with Chimera. I have highlighted the basic triplet to show its exposure to facilitate transport.
Oxidative Stress Alters tTG and Triggers Inflammation

A recent article also links tTG intracellular chemical modifications (SUMOylation), which are linked to oxidative stress, to activation of NFkB and inflammation. Thus, tTG is a major player in controlling cell surface interactions with potentially toxic materials such as polyglutamine-rich gliadin, as well as triggering inflammation in response to oxidation stress.

When I read that cystic fibrosis results in an increase in the production of tTG in lungs, I immediately thought of the role of tTG as an autoantigen in celiac disease and the progression of celiac into Hashimoto’s thyroiditis, which has the same autoantigen, tTG. I suspected that the overproduction of tTG and inflammation in cystic fibrosis should increase tTG autoantibody production and tTG-mediated autoimmune diseases of celiac and Hashimoto’s thyroiditis.

A quick PubMed search of CF and celiac, revealed a study of comorbidity between CF and celiac in Norway. Just as expected, the two diseases occur together with a frequency three times higher than predicted by coincidence. CF stimulated tTG overproduction was driving the development of celiac.

Art Do you think that gluten/gliadin can initiate systemic autoimmune disease without the small bowel damage that the medical establishment calls celiac?

William Trumbower,
The gliadin/tissue transglutaminase interaction is very complex. Gliadin, with its polyglutamine stretches, is a problem because it probably gloms on to the acidic polysaccharides of the epithelial cells, i.e. it is probably a plant defense against herbivores. This attack on the eater's gut can be neutralized by tTG, because it converts the glutamines to glutamic acid residues and disrupts binding to the epithelial surface polysaccharides (GAGs). Unfortunately, during the enzyme action, the tTG becomes covalently attached to the gliadin. In the presence of inflammation, the tTG/gliadin complexes can be translocated into cells to ultimately yield anti-tTG and anti-gliadin antibodies. These antibodies can produce autoimmune disease elsewhere.

I think that it is the anti-tTG antibodies bound to tTG and gliadin, that in turn binds to the heparan sulfate recycling system and kill epithelial cells of the intestine and causes developmental problems for microvilli and absorption of nutrients in the small bowel. But, I think that gliadin could possibly cause autoimmunity just by being combined with another source of chronic gut inflammation, such as H. pylori or biofilms.

I think that everyone suffers a little from grain.

A recent study : A deregulated immune response to gliadin causes a decreased villus height in dq8 transgenic mice, Eur J Immunol. 2009 Sep 30, showed a signficant degree of shortening of the villi in gliadin sensitized mice, when treated with indomethacin (inhibits Cox-1 and Cox-2 enzymes) For those of us with gluten intolerance or celiac disease this poses a substantial conumumdrum, especially those who are taking daily aspirin for cardiovascular reasons. Do you see an alternative?

Thank you again for generously sharing your insights!

I always wondered why Cystic fibrosis pts developed the requirement for prescription digestive enzymes. Often the patients are young so insulin resistance is not commonly overt and they rarely present as obese.

I'm sure chronic use of the anti-pseudomonal antibiotics (ceftaz and/or tobra) do not help the gut to heal or a healthy gut flora? Conventional medicine would make it worse, it appears, from what you've presented regarding the GI tract (and perhaps the biliary tree?)...

Sometimes heparin (long time ago) was used as DVT prophylaxis, now it is lovenox or other LMW-heparin derivatives. You mentioned tTG and gliadin-complex 'binds to the heparan sulfate recycling system and kills epithelial cells'. Would exogenous heparin improve epithelial cell damage? Is there any link or benefit for celiac or silent-celiac conditions?

Dr. B G,
I think that there is a great potential for heparins of various sizes for treatment of the gut and also for topical applications. The med/drug industry has been so focused on coming up with a pill that can increase serum heparin, that they have ignored the benefit of treating the gut with heparin directly. Afterall, gut and lung are the natural sources of heparin. It is also shocking that physiological significance of heparin release during degranulation of mast cells is ignored. No one seems to ask the point of heparin release during the early signaling for inflammation. Heparin attenuates inflammation. Heparin blocks anti-phospholipid antibodies. Heparin injection into cells blocks IP3 signaling. Heparin (IV) stops migraines. Heparin blocks signaling by cytokines, growth factors, etc. Heparin releases a gazillion proteases, hormones, etc. bound to heparan sulfate proteoglycans/ECM. Heparin binding can be blocked by typical phytochemicals (anti-oxidants). Heparin binds to all of the complement components and most of the clotting factors. Heparan sulfate is the major component in kidney, gut and brain barriers -- they leak when inflammation inhibits GAG synthesis and can be repaired by heparin.

Why is the medical community glycophobic?

Life: GAG to RNA to protein to DNA to Watson

Anon,
Replacement for COX inhibitors, because of gut/microvilli development and leaky gut impact.

NSAIDs are supposed to be useful in lowering cardiovascular risk. Presumably this means that COX inhibition will lower the production of prostaglandins that participate in some aspect of clotting that precipitates another cardio event.

My general impression is that use of COX inhibitors is a replacement for understanding the basis for the events that cause cardio damage. Then other drugs are needed to repair the damage from the COX inhibitors. It would seem more effective to address the original problems, which in most cases are the result of dietary inflammation. I would anticipate that the benefits of a rigorous anti-inflammatory diet and exercise regime +or- COX inhibitors, would show that the benefits would not be additive, i.e. they do the same things. Fortunately, the diet does not have the negative side effects.

Unfortunately, the COX inhibitors don't have an assay to determine if they are working. Otherwise, the impact could be compared with diet to reach the same results. It might be that COX inhibitors are similar to statins, in that they show no benefit in reducing cardiovascular risk for individuals with low chronic inflammation.

THANK YOU!! I haven't had time to look up heparin so I appreciate all the info! (I suspected as much but HAD NO IDEA THE BENEFITS). We have used such nasty drugs for migraines -- ergotamine (remember -- from rotten crops implicated in witch trials).

'glycophobic' *haaa* That is good.

I think the medical community just are not aware the perfect solution exist for the same problems (as you mentioned the USDA Food pyramid -- gluten-grains, omega-6 and brominated veg oils). You've summarized it PERFECTLY in the anti-inflammatory diet.

Because of escalating drug costs and reduced reimbursement from Medicare, etc, heparin may see uses again for distal venous thrombosis prophylaxis in the in patient hospital setting, instead of the expensive LMWHs like Lovenox. we used a lot when I was a student 10+yrs ago -- it worked!!!

Isn't that interesting. Have you ever read "Management of Celiacs Disease" by Dr. Sidney V. Haas (pub 1951)? He found the Specific Carbohydrate Diet also seemed to benefit Cystic Fibrosis patients as weel

Mrs. Ed,
I agree with the parallels to Dr. Haas. The low or zero carb diets have been recommended to cure many diseases and may be considered traditional medicine. They are tried and true. Modern medicine has discarded this wisdom and replaced it with the commercial drug and medical authority model. Unfortunately the new medicine is less effective in the application of simple dietary solutions to complex diet-based (primarily inflammatory) medical problems.

I try to provide a molecular/cellular explanation for why many of the traditional, dietary/herbal approaches worked and why pharmaceuticals have inherent disadvantages. My dietary suggestions are nothing more than traditional wisdom informed by the biomedical literature that is ignored by the medical community.

I hope that you have seen my articles on biofilm treatments that were developed for the treatment of autism. I also wrote an article on the finding that fever returns normal function to many children with autism (Suite101).

Thanks for your comments and I hope that you enjoy my other articles.

Dr. Ayers, I hope you are still out there in the blogosphere because I just happened upon this post even though it was a few years ago. I have cystic fibrosis and I am researching the connections between my symptoms and inflammation. If you could help point me in the right direct, that would be REALLY helpful. Firstly, if you could explain your post in more detail for someone who is not a medical researcher, like what is tTG and what is its role?