Avian Flu Acquired a Basic Internalization Domain in the 1990’s 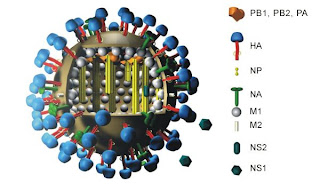 cids that provided another way into human cells.

During the early 1990’s isolates of avian flu, H5N1 started to appear that eventually developed six basic amino acids in a stretch about 340 residues from the amino terminus. These basic amino acids are thought to be an adaptation to decrease inactivation by a host protease.

The red area is the region that has accumulated the basic amino acids (R and K). Note that the novel H1N1, does not yet have this region.

The New Basic Region Looks Like an Internalization Signal

Those who have followed this blog know that I have an interest in heparin binding domains, groups of basic amino acids (K for lysine and R for arginine) of proteins that bind the common acidic extracellular polysaccharide heparin. Most recently I have been focusing on unusual triplets of basic amino acids that are found in the proteins of allergens and autoantigens. These basic triplets are similar to the basic quartets that are used as signals to move proteins from cytoplasm into the nucleus of cells, i.e. the nuclear localization signal (NLS).

Basic Sextet for Internalization and More

The newly evolved basic sextet, RRRKKR, should be readily transported into cells by the mannose receptor and then taken into the nucleus, because it would also act as a NLS. This should also mean that the new H5N1 viruses with this hemagglutinin should attach to numerous cells of the immune system and potentially transported to other areas of the body.

H5N1 has recently been found to infect tissue that lack the sialic acid sugars that are the typical target for avian flu. The new targets are not known. I would start to suspect the mannose receptor that I have postulated to be involved in initiation of allergy and autoimmunity.
at 1:33 AM

There is an article at newscientist.com about some new classes of antivirals that target proteins created by the host that are crucial to the virus' reproduction. The benefit of this approach is that large numbers of viruses can be treated with a single drug, even newly evolved ones. This is off-topic to this post but may be of interest to you in general. If so, I would be interested in hearing your comments.

Back onto H1/H5N1. Are you aware of the work of Dr. Henry Niman in tracking the outbreak & recombinations with other flu viruses? Extensive coverage is here.

A friend, a healthy athletic 28 year old woman, suddenly died in Los Angeles last week because of an autoimmune inflammatory response (cytokine storm) associated with H1N1. She did not smoke.

The only information I find on the internet which connects treatment of H1N1 cytokine storm by means of vagus nerve stimulation with nicotine is your article, "Nicotine, Anti-inflammatory H1N1 Cure", May 4, 2009, at Suite101.com.

When I Google 'autoimmune inflammatory response vagus nerve nicotine' I get pages of links to papers by Dr. Kevin Tracey and others. Dr Tracey and the North Shore-LIJ Research Institute have even been issued a patent on this method of treating cytokine storm, Patent #6610713. Septicemia is mentioned often. Swine Flu, never.

The medical establishment and the media seem to be completely ignorant of this potential life saving treatment. It is ridiculous that people should die because of lack of a nicotine patch.

Can you writ another article and submit it to media with a wider readership than your blog?

Anon,
As you note, there are no clinical trials of simple approaches to mitigate against H1N1 cytokine storms. There is no mechanism to fund trials for common herbs, spices, etc. that might be highly effective against the deadly symptoms of the flu, because you can't get lucrative patents for nicotine patches, tumeric or berberine, etc. The only games permitted are patented antivirals and vaccines.

Doctors won't act unless there have been clinical trials or as in the case of vaccines, the government accepts the responsibility sight unseen.

Anon, anon,
I would say off the top of my head that a low molecular weight heparin should actually decrease the risk of H1N1 infection, since it would probably compete for binding of the virus to host cells. That is just a guess.

The H1N1 participate in rare thrombcytopenia through very different mechanisms. I wouldn't worry.

Years ago you had an article on nicotine and how it would inhibit H1N1. I was curious why it was missing here.