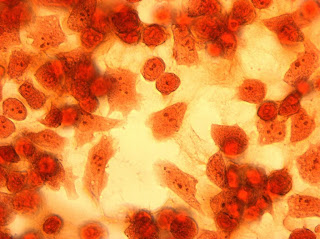 Transcription Factors Synthesized by Recombinant Bacteria
The technical solution was tested and successful results were announced in a prior to publication paper in the journal Cell Stem Cell. Four transcription factors successfully used in prior experiments to induce stem cell transformation were synthesized using recombinant bacteria. The problem was getting the proteins into skin cells that were already growing in cell culture.

HSPG Circulation Should Take in Transcription Factors
By inspection, I have demonstrated that proteins observed to be taken up by cells, without specific receptors, e.g. HIV-TAT, lactoferrin, heparanase, allergens, autoantigens, have triplets (or neighboring pairs) or basic amino acids, and this uptake is inhibited by heparin. One would expect that transcription factors would be naturally taken into cells by HSPG circulation. Just adding recombinant transcription factors to cultured skin cells should transform them into stem cells. I don’t believe that this was tested. Instead, more powerful heparin-binding domains were added.

Poly Arginine was used for Uptake of Transcription Factors
The investigators ensured a high efficiency of uptake by adding potent poly arginine sequences to the ends of the transcription factors and synthesized them in recombinant bacteria. The recombinant, arg-tailed transcription factors were taken up by the cultured skin cells and changed the pattern of gene expression in the skin cells. The cultured cells reverted to embryonic patterns of gene expression of pluripotent stem cells. The recombinant proteins were eventually metabolized, but the stem cells had been stably transformed.

Wow, amazing recipe! It’s a healthy one. This one is an excellent one. Thanks for sharing. Looks good. Thanks for the tip. It was very useful. You made it and they actually turned out well. Happy to read your post and appreciating you for making these better and yummy foods. Thanks a lot. You will get academic integrity, quality and punctuality from sites available now.