What’s the Opposite of Inflammation?

I want to commemorate the writing of my 100th article on Blogspot by discussing a new insight into inflammation.

I have been searching the last several years for an anti-inflammatory system to balance inflammation. Now I realize that there is no opposite to inflammation. There is only completion of inflammation to return to the original state. Inflammation is a process that includes resolution or recovery from the defensive, destructive state of immunological activity.

Inflammation is the martialling of resources for battle by offloading lymphocytes from the blood stream, engaging the enemy b 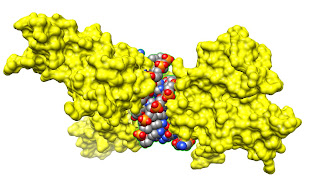 y triggering the release of toxic secretory vesicles from leukocytes, and cleaning up the carnage by macrophages engulfing cellular fragments. Each step in the inflammatory process induces the next step until there is a return to the origin. Inflammation is not balanced by anti-inflammatory processes.

Inflammation is triggered by molecules characteristic of viruses, bacteria or fungi binding to membrane receptors (TLRs). The result is activation of the inflammatory transcription factor, NFkB (illustrated holding DNA), that turns on the expression of dozens of genes that code for cytokines (IL-1, IL-6, TNF) and enzymes (COX-2) that produce signal compounds. Among the signal compounds are the inflammatory eicosanoids (PGE2) produced from the omega-6 fatty acid arachidonic acid (ARA).

The complex signaling pathways that lead to PGE2 synthesis subsequently initiate transcription of genes that code for the enzymes that make lipoxins (resolvins and protectins) from eicosapentanaenoic acid (EPA) and docosahexaenoic acid (DHA). EPA and DHA are the two omega-3 fatty acid components of fish oil and a shortage of these dietary components blocks the next step, resolution of inflammation.

The lipoxins reduce the permeability of blood vessels, stop the offloading of lymphocytes, reduce responsiveness to inflammatory cytokines, recruit phagocytic macrophages to clean up debris and orchestrate a return to quiescence of the inflammatory system. Without adequate lipoxins, inflammation continues.

Fortunately a shift to an anti-inflammatory diet and lifestyle provides a simple solution to chronic inflammation.

[Note added: Perhaps the opposite of anti-inflammatory is immunosuppressed, as in high use of omega-3 oils can increase the risk of tuberculosis of influenza.]
at 4:41 PM

I have some good news. On Monday 12th Jan 2009, my mum had a Mini Mental State Examination. She got 26 out of 30. This is the same score she got in May 2008 when she was on 10mg/day of Aricept, a dose that gave her such bad side-effects, she had to cut down to 5mg/day. Her mental faculties then deteriorated.

This suggests that the recent increase in her DHA intake (from 400g/week smoked salmon) has improved her mental faculties and it hasn't caused her any bad side-effects. She's now also taking Curcumin & Berberine. Cheers, Nige.

Nigel,
That's great! Did you mention if she is taking glucosamine? I can see a fairly quick response when I take it -- tendonitis. My aging dog showed some stiffness in rising and I slipped him some glucosamine and he was running in the back yard the next day. It seems to be a good general anti-inflammatory.
Best to you and yours.

She used to take glucosamine sulphate 2KCl years ago when she had hip joint pain. She stopped taking it when the hip joint pain stopped.

I don't think that I'll be able to persuade her to take any more pills at the moment as she was quite reluctant to take the Curcumin & Berberine!

The logical extension of your argument is that if people have insufficient Omega 3s and particularly DHA and EPA there is a risk shut down of the inflammatory cycle may be compromised.

I also had seen that asprin impacts on production of downstream products of DHA.

Revised improved version on the way.

The truth is that the opposite to inflamation is peace, health and inflamation can be reversed by changing your thought around. Try it you will be very surprised.
lk