Air travel during the holidays means sitting quietly for hours while the blood pools in the major veins of your legs. This is a test. How have you been eating lately? If you stuck to an anti-inflammatory diet and got your exercise, just fidgeting a little and flexing your legs ever once in a while should avoid clots. If you are the typical sedentary American with an inflammatory diet, then worry. One tenth of you will typically have clots in your leg veins after a long flight.

Rolling stones gather no moss, and the same is true for rapidly moving red

blood cells (RBCs). Keep them moving and they don’t stick together. Slow down RBCs traveling along sticky vessel walls and you have problems. RBCs have no nuclei and since the intracellular secretory system originates from the outer membrane of the nucleus, red blood cells don’t secrete anything. RBCs just age until they are removed by the spleen. So RBCs just move passively with the rest of the blood. 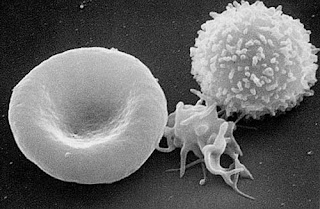 clot formation is the platelet. Platelets are cell fragments. They are formed by extrusion and shearing. The process is like bubbles forming as you blow air through a child’s bubble wand. Cells in the bone marrow are squeezed through a grid and the extruded fingers of the cells are blown away in the blood flow as platelets. The electron micrograph shows a platelet between and RBC and a white blood cell. Platelets don’t have any active cell machinery, so they are just little bags containing secretory vesicles that can be released by triggering of receptors on their surface. Platelets are only good for one shot of release.

Platelet release of secretory contents is triggered by norepinephrin, ADP and PGI2, an inflammatory prostaglandin produced from the omega-6 arachidonic acid. Norepinephrin is one of the fight-or-flight hormones that prepares the vascular system for damage control. ADP is released from other activated platelets and insures that isolated platelets are not randomly activated.

One of the proteins released is platelet factor 4. I 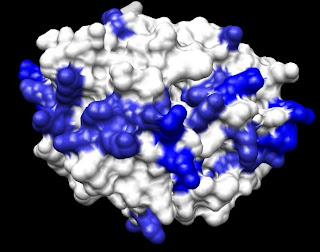 have illustrated PF4 and the strip of basic amino acids (blue) that girdles the protein are readily apparent. PF4 binds strongly to heparin. Since the clotting process is normally under heparin inhibition, PF4 release from platelets removes the heparin inhibition and promotes clotting. ADP is also released and promotes further activation of other platelets.

Clot formation occurs in response to stress (norepinephrin), damage (vascular inflammation) and a consensus of platelets (ADP). Chronic inflammation can mimic this combination of signals through its impact on heparin metabolism. My research suggests that inflammation lowers heparin synthesis. An example of this effect is kidney damage caused by diabetes. High blood sugar causes inflammation of the kidney blood vessels, this reduces heparin production and since heparin lining the vessels is needed to retain proteins as blood is filtered in the kidney, protein is lost into the urine, i.e. proteinuria. Similarly, chronic inflammation can disrupt the blood brain barrier that is also made up of heparin.

A major source of chronic inflammation is an inflammatory diet. A recent research study indicated that a typical inflammatory American diet leads to elevated risk for deep vein thrombosis. Alternatively, an anti-inflammatory diet rich in B vitamins and omega-3 oils minimized DVT. Saturated fats had no impact, consistent with the lack of evidence supporting the shift from saturated fats to toxic omega-6-rich polyunsaturated vegetable oils.

So, the best thing that you can do to protect yourself from clots when you travel over the holidays, is to eat right and get your exercise, before you travel. Avoid starch (in large amounts) and polyunsaturated vegetable oils (except olive oil.) Corn oil, soy oil, cottonseed oil and safflower oil are particularly inflammatory. Eat plenty of veggies and fruits and enjoy the turkey and cranberries. Make sure that the only sweeteners used are sugar and honey (avoid high fructose corn syrup.) Light corn syrup is the stealth form of HFCS -- it may be lower in calories, since fructose is sweeter than sugar, but it is highly inflammatory! (Research also indicates that fructose causes premature wrinkling and skin aging, by enhancing the crosslinking of collagen. HFCS also causes type II diabetes in lab animals.)
at 4:33 PM

It's the same topic , but I was quite surprised to see the opinions I didn't think of. My blog also has articles on these topics, so I look forward to your visit. 토토사이트