Male pattern baldness appears to result from the interaction between enzyme-modified male sex hormones (DHT) and receptors in some hair follicles of the scalp.  Inhibition of the enzyme by topical (Rogaine) or oral administration (Propecia) of an inhibitor, e.g Finasteride, can stop hair loss.  One of the significant side effects of oral use of Finasteride is loss of all sexual functions, which can be temporary and reversible after the drug is stopped, or permanent.  I think that inflammation may play a critical role in both hair loss (and prostatitis) and loss of sexual functions in response to Finasteride and an anti-inflammatory approach my be helpful.
Testosterone is Converted to  Dihydrotestosterone (DHT) by 5-Alpha Reductase 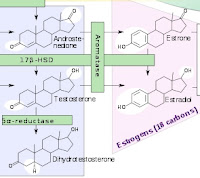 Jimmy Moore invited me to speak on his Livin' La Vida Low Carb show.  So I recorded a conversation with him about low carb diets, inflammation and disease.  It was great fun to talk about fixing gut flora and the benefits of an anti-inflammatory diet that is based on low carbs and high saturated fats.