Chronic Inflammatory Demyelinating Polyneuropathy (CIDP) is chronic, relapsing autoimmune disease in which the immune system attacks the insulating myelin sheaths of nerves in the limbs. The result is numbness and pain. An acute version of this myelin compromising disease is Guillain-Barre syndrome (GBS) typically initiated by Campylobacter jejuni infection. A related disease of brain tissue is multiple sclerosis (MS). In each of these cases antibodies bind to protein or glycolipid antigens unique to myelin and target the attack by lymphocytes.

Autoimmune diseases represent a disruption of the normal function of the immune system that arises from a breakdown of the self/non-self tolerance process. Immune responses by antibodies or lymphocytes is normally reserved for molecules that don’t exist in the body, i.e. self. Differentiation of lymphocytes in the thymus or bone marrow involves systematic elimination of all lymphocytes that interact with self antigens. There are, however, self antigens that are not normally encountered by the immune system, e.g. nuclear antigens, brain antigens, since these antigens are only excluded from the cytoplasm or result from specialized differentiation. Thus, you can find in mystery novels the use of letters coated with powdered brain antigen to slowly kill targets by induction of a lethal autoimmune disease.

The self antigens that are the typical targets of the CIDP, GB and MS are gangliosides, myelin glycolipid also produced by C. jejuni, and basic proteins such as peripheral myelin protein 22. The glycolipid makes sense, because the initial exposure is during a bacterial infection that also produces inflammation. The basic proteins are a different case.

I have examined numerous self or autoantigens that are the targets for antibodies produced in autoimmune diseases and allergies. In each case the same amino acid sequence or domain is present, three basic (positively charged, arginine or lysine) amino acids. This is true for the myelin autoantigens; allergens from ragweed, mites, peanut, etc.; diabetes, lupus and arthritis.

The three basic amino acids, RKR, are at the end of the protein amino acid sequence.

A dramatic instance of tissue damage caused by physical injury or infection, is superimposed on chronic dietary inflammation to provide the environment for an inappropriate response of the immune system to a self or identical foreign antigen. The only proteins that seem to be presented in this way to the immune system are those with the strong heparin-binding domain, BBB (B = basic amino acid). This indicates that perhaps the reduction in heparin production that accompanies inflammation, may be responsible for the aberrant immune response. It is also noteworthy that heparin and anti-inflammatory agents can reduce the symptoms of many autoimmune diseases.

There are many complex therapies to deal with the symptoms of these autoimmune diseases. In all of these cases, one of the most eff 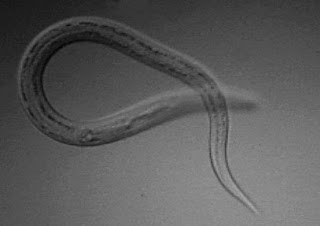 ective approaches is an anti-inflammatory diet and lifestyle. A novel additional approach is helminth therapy, infection with parasites to suppress the T-lymphocyte autoimmune attack. This approach is effective with MS, and I think would be an excellent, relatively safe approach to be examined for the other myelin autoimmune diseases.
at 4:04 PM

Where does one find the right diet for someone with MS?

My take on MS, is that it is a brain form of CIDP, i.e. an autoimmune attack on the myelin sheaths of brain neurons. Chronic inflammation, probably dietary, plus an acute form of inflammation, such as an infection, attacked the blood brain barrier and permitted the basic myelin protein to be exposed to the immune system. MS then flares up with increases in inflammation that reopen the blood brain barrier.
Elsewhere on this site, I give the outline and logic of an anti-inflammatory diet and lifestyle suggestions. Several of the diets advertised on this site are also good. There are also lots of books, e.g. by Sears. The most critical suggestion is to eliminate vegetable oils, except olive oil, from your diet. They are a major part of your problem.
Good luck.

This is the way autoimmune diseases spread and the deficiency common to all diseases is Vitamin -D.
The simple diet guidelines to help prevent these diseases are at http://www.cidpusa.org.

Dr. Ayers,
I have CIDP and it is progressive. Started in my toes, but now all my feet and ankles, moving up my legs. You mentioned ragweed and mites regarding antigens. I took ragweed and dust mite allergy shots two years leading into this condition. Could this be a factor?
Thanks,
Ron

Did you know that you can shorten your long links with AdFly and get dollars from every click on your short links.