Scurvy and the Need for Vitamin C
Old timey sailors got the symptoms of scurvy, defective collagen and connective tissue, presumably because they stopped eating leafy greens that contained the needed vitamin C, aka ascorbic acid.  Primates/humans and guinea pigs are among the few animals that lack the ability to make their own ascorbic acid and therefore must eat a diet with a minimum amount of the vitamin to avoid a deficiency disease.  This is the conventional wisdom partially based on observation and experiment, but also founded on conjecture. 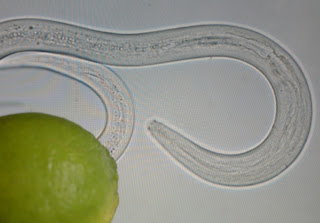 Parasitic Gut Worms Were the Natural Source of Vitamin C
I don't believe that vitamins are essential ingredients of a healthy diet, but rather I contend that all of the necessary nutritional chemicals are produced by the microorganisms of the gut.  I have previously discussed the gut flora (bacteria and fungi) as the source of most vitamins.  I wish to expand vitamin production to include gut fauna (animals).  I think that it is likely that intestinal worms are the historically natural source of human vitamin C.

Gut Bacteria Control the Development of the Immune System
The human gut actively communicates with the biofilms of bacteria and fungi that form a lining for the healthy gut.  The aggressive cells of the immune system that attack invading pathogens, develop in response to chemical signals from filamentous gut bacteria, and the suppressive cells of the other half of the immune system, which prevents attack on innocuous food antigens (to avoid allergies) or the human body itself (autoimmunity), develop in response to Clostridium ssp.  Thus, the immune system can be highly compromised, if the gut flora bacteria are damaged, e.g. by antibiotics.

Vitamins are Signaling Chemicals of Gut Biofilms
The communities of bacteria in gut biofilms are self-regulating by exchanging chemicals called quorum sensing signaling molecules.  Different species of bacteria and fungi in the biofilms produce and detect different chemical signals.  Since the biofilms are in intimate contact with the cells that line the gut and absorb dietary nutrients, it is not surprising that the biofilm signaling molecules are also absorbed by intestine cells.  Many of these biofilm signal molecules are vitamins, e.g. the B vitamins.  Gut bacteria are the natural source of most vitamins and healthy gut flora eliminates the need for eating vitamins in food or supplements.  Vitamin deficiencies are a symptom of a damaged gut flora.  Antibiotics and vitamin supplements can damage healthy gut biofilms.

Dietary Soluble Fiber Feeds Gut Flora
The human gut flora consists of a couple of hundred different species of bacteria in each person.  Those bacteria in aggregate can produce about a hundred thousand different proteins that focus on the digestion of food molecules that the upper gut cannot digest and absorb.  Since the upper gut can only digest proteins, fats and starch/sugars, that means that the gut flora eat the rest, undigested plant/animal polysaccharides.  Soluble fiber is the plant polysaccharides, e.g. inulin and pectin, that are digested and feed the gut flora.  The undigested polysaccharides include cellulose.  Lignin and some other plant polymers also pass through the gut and are eliminated.  The undigested stuff is called insoluble fiber and it also has bound phytate, which drags some metals such as zinc out with it.  That is why insoluble fiber, such as wheat bran, is not nutritious or healthy.  Insoluble fiber is also a minor contributor to the bulk of stools, which are made up predominately of the gut bacteria that have grown on soluble fiber.

Sea Voyages Damage Gut Organisms
The hundred of different species of bacteria in the gut change in proportions to adapt to different foods in each meal.  If the diet is fairly constant, then the diversity of the population gradually increases, just as the diversity of species in a tropical rain forest is greater than in a temperate forest.  This also explains why gut flora diversity is far less in the USA than in other parts of the world.  Americans are encouraged to eat diverse diets in the search for vitamins and superfoods.  Each dramatic change in diet makes it hard for the gut flora to adapt and the remaining bacteria are those that are generalists.  It might also be expected that early sailors who changed their diets dramatically when they went to sea, ended up with a highly compromised ship-board gut flora (and fauna.)

The Perils of Hygiene
I have a fascination for stories involving the potential of rampaging tigers.  Images of a tiger attempting to drag a hunter from his seat on an elephant or the need of a colleague to employ an armed bodyguard when capturing crabs from Malaysian Mangrove roots at night, linger in my imagination.  I still think about the report of Wallace guarding his derrière while collecting beetles in Bukit Timah, Singapore, in “The Malay Archipelago.”  Humans tend to be incompatible with lions and tigers and bears, and we wipe them out.  We do the same with bacteria, fungi and worms.  We wash our hands, flush the toilet, use hand sanitizers, kill weeds, spray pesticides, grow meticulous lawns/crops, dose ourselves with antibiotics and cleanse.  We are free of the threat of tigers, but we failed to see what else was lost during their extermination.

Probiotics Don’t Fix the Damage of Antibiotics
Antibiotics ravage gut flora.  It is no surprise that a course of antibiotics frequently leads to diarrhea or constipation, since normal stools require normal gut flora.  What is surprising is that physicians, e.g. Dr. Oz, seem to think that antibiotic decimated gut flora can be fixed with probiotics.  Sure, probiotics can provide a temporary bandaid, since Lactobacilli that would normally live on milk in the gut of newborns, are able to provide most of the functions of an adult gut flora.  But probiotics don’t survive in the adult gut and probiotics to not repair damaged gut flora.

Changes to Gut Flora are Permanent, Unless....
Gut bacteria are like wolves in Idaho.  If you don’t bring in new wolves and stop hunting them, you never again have wolves in the wilderness.  If you don’t bring in new bacteria and feed them, damaged gut flora does not repair.  Antibiotic treatment that wipes out the bacteria needed for development of the suppressive immune system will lead to autoimmune disease.  However, repairing the gut flora by flushing in new bacteria (fecal transplant) or gradually reintroducing new diverse bacteria with fermented foods, can also reverse autoimmune diseases as the immune system is repaired.

Parasitic Worms Were Lost at Sea
We think that vitamin C is only provided by plants that we eat, because we didn’t notice what was lost when we cleaned out the worms that typically inhabit the human gut.  Who would have thought that those inconvenient creatures were there for our own good?  We unknowingly compensated for the lost vitamin C production of the worms by incorporating foods rich in vitamin C in our diets.  Shipboard diets that eliminated bowel worms were augmented with limes rich in ascorbic acid.

Guinea Pigs Also Need Worms
It is interesting to note that the experimental animal used to replicate human nutritional requirements for vitamin C is the guinea pig, which is one of the few animals (in addition to bats and primates) that doesn’t make its own.  It is also interesting that guinea pigs (and bats?) commonly have intestinal worms that have to be purged from their bowels before they are used in the lab.

Gut Flora and Fauna Provide Vitamins
My bottom line is that a normal, healthy gut contains all of the bacteria, fungi and worms to supply all of the needed vitamins.  I do, however, think that dietary vitamin C is a good replacement for one function of intestinal worms, even though I will be watching for other benefits ( Helminth therapy?) that were lost with the removal of these parasites.