The intestines produce enzymes to digest food, antimicrobial peptides to kill pathogens and have lots of surface area to absorb nutrient molecules released from the food 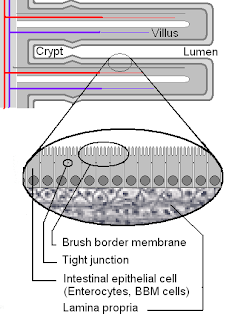 macromolecules (protein, polysaccharides, fats). The epithelial cells that line the intestines, enterocytes, must communicate with bacteria in the gut, the gut flora, to maintain bacteria helpful in food digestion, i.e. probiotic bacteria, and trigger an immune response to eliminate pathogens. Probiotic bacteria are tolerated and pathogens are identified and attacked.

Enterocytes are produced by division of stem cells at the bottom of the crypts that are in the valleys between the villi that project into the lumen where the digesting food is. New enterocytes are added at the base of the villi and old enterocytes are sloughed off at the top of the villi. As the new enterocytes move up the villi, they differentiate to produce the dramatic surface of microvilli, the furry brush border that further expands their surface area. The mature enterocytes produce transport proteins on their microvilli to take up sugars, amino acids and fats. The small nutrient molecules pass through the base of the enterocytes and bath the cells below, the lamina propia. The nutrients enter the capillaries of the villi and travel to the liver. Fats are transported through the lymphatic system.

Bacteria that slip through the enterocyte layer encounter macrophages and other types of white blood cells of the lamina propia. Among these cells are the Paneth cells. Fragments of the cell walls of bacteria bind to the NOD proteins of the Paneth cells and trigger the secretion of antimicrobial peptides, the cryptidins. Cryptidins are antimicrobial because of their array of basic amino acids surrounded by hydrophobic amino acids. These short proteins are able to disrupt the membrane function of most bacteria. I think they work on bacteria the same way that amyloid proteins, e.g. amyloid plaque proteins of Alzheimer’s disease, kill human cells. In fact, amyloid fibers bind to heparin and so do antibiotic peptides.

Here is an example of an antibiotic peptide, cryptidin 4,

Note the pairs of basic amino acids (blue). These amino acids are necessary for toxicity to bacteria. Heparin binding domains from proteins are 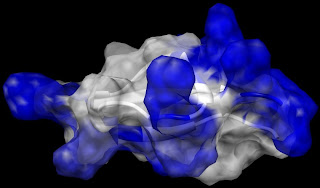 With each meal, the fat content normally stimulates the production of a hormone, cholecystokinin, that binds to a receptor and causes an anti-inflammatory release of cytokines from the vagus nerves that reach the villi. Thus, food normally makes the intestines more tolerant of food antigens.

If the intestines become chronically inflamed, then exposure to normal probiotic bacteria can lead to cycles of inflammation that damage the integrity of the intestines. The intestines lose the ability to discriminate between probiotic and pathogen.

Crohn’s disease is an inflammatory, autoimmune disease of the bowel. The chronic inflammation of the lamina propia eliminate the ability of the Paneth cells to produce cryptidins and bacteria set up residence in the crypts and cause continual inflammation. This disease is typically treated by suppressing inflammation and treating with antibiotics.

Other treatment approaches that have been found effective are omega-3 oils to stimulate production of anti-inflammatory prostaglandins, pre- and probiotics, heparin and helminth eggs, e.g. wireworm.

Crohn’s disease would seem to benefit from the standard recommendation of an anti-inflammatory diet and lifestyle.
at 5:49 PM

This article is filled with more than enough content, utmost valuable for a newbie in the field like me! Anyways, hearty regards.