A Paleolithic Perspective on Biomedical Literature

Homo sapiens seems to be inflammation prone, based on its assortment of biochemical deficiencies. All of the following lead to inflammation: hyperglycemia, vitamin C deficiency, fish deficiency, vitamin D deficiency, grilling meat. Is this an adaptation to agriculture and high population/communicable disease risk? 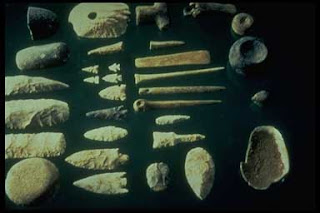 I was just visiting Diet Rosso and his article on the paleolithic diet flashed me back to some thoughts that I had on the evolutionary benefits of inflammation. So, Rosso made me think about this.

Inflammation is a big health problem in the US. All of the major diseases are inflammatory and all are exacerbated by the inflammatory US diet. But why is the fast food diet so inflammatory? Why is our corn/soy agricultural economy so hazardous to our health?

Corn and soybeans provide a good balance between carbohydrates, fats and protein. The amino acid composition of the combo is also fairly good, and corn and soy oils are high is unsaturated fats. So why does a corn/soy diet lead to degenerative and autoimmune diseases?

I think that the answer is that inflammation is getting a bad rap; as long as our immune system produces effective local responses to pathogens, we are pleased, but when the immune system cranks it up in response to a deluge of disease, we complain. I argue that our current inflammatory response to fast food is just a slight embellishment of the first dietary-based increase in inflammation that provided adaptive protection against the dangers of agriculture.

As I see it, agriculture had a series of dramatic impacts on the evolution of plants, animals and humans, in particular. Taming of plants and animals altered the human diet. Agriculture also institutionalized grilling and grouling, which meant bringing together carbs and protein at high temperatures. The result was an increase in dietary starch, seed/grain oils and advanced glycation endproducts (AGEs). There was also a decrease in fish, leafy vegetables and complex carbohydrates/fiber. Agriculture also led to a dramatic increase in population density.

I imagine that the first villages or very large family groups that resulted from sustained planting of harvestable crops resulted in plagues. Lots of people in close proximity with minimal hygiene is a prescription for infectious disease. Agricultural development required an immunological adaptation to higher loads of communicable diseases. That adaptation was inflammation triggered by agriculturally-associated diets high in starch and low in browsed veggies.

Hunting/gathering, especially along coasts, provided dietary vitamin C, as well as a high ratio of omega-3 to omega-6 fatty acids. Early humans defective in the ability to synthesize vitamin C or omega-3 fatty acids, would not suffer if they ate plenty of leaf veggies. Wild fish and game, as well as leafy veggies, have a high ratio omega-3 to omega-6 fatty acids, so these people would be safe from inflammation-based disease and infertility.

Agriculture focused on seed harvest results in a dramatic shift in diet and disease. Communicable disease was not a problem for hunter/gatherers, because of the necessarily widely distributed small population groups. Agriculture concentrates populations around the crop lands and increases the benefits of physiological energy expenditures on heightened immune activity to provide consistent protection against pathogens. Agriculture required chronic inflammation for disease protection.

Inflammation triggered by cues in the agricultural diet would have a high selective advantage. Individuals who increased their chronic level of inflammation in response to high blood sugar, compounds produced during cooking, i.e. AGE, vitamin C deficiency, vitamin D deficiency (low exposure to sun) and/or omega-3 oil deficiency, would have survival advantage in high population densities associated with agriculture.

The fast food diet is nothing more than an exaggeration of the agricultural diet and it produces and an exaggeration in the human adaptation to agriculture, high chronic inflammation and a suite of inflammatory diseases. Metabolic syndrome is another name for high chronic inflammation. Obesity is inflammatory. A sedentary lifestyle is inflammatory and aging is a suite of symptoms associated with inflammation. Hunter/gatherers didn’t show the same signs of aging as modern humans, and probably had comparable longevity (although there were many other risks.)

Lastly, I want to ponder the modern decline in fertility. Fertilization and implantation requires suppression of inflammation in the female reproductive system. Semen is uniquely rich in omega-3 oils and women who have a high frequency of unprotected coitus with a man with a high level of omega-3 in his semen, are much more likely to become pregnant and carry a pregnancy full term. The fetus requires high levels of omega-3 fatty acids for brain development and can rapidly deplete the omega-3 fatty acid a mother with a deficient diet. Omega-3 deficiency is associated with preeclampsia.

Early males and females with an inflammatory agricultural diet would tend to be infertile, because of omega-3 oil deficiencies and chronic elevated inflammation. Periodic exposure to an abundance of omega-3 fatty acids, such as feasting on migrating salmon, would synchronize fertility and subsequent births. It is humbling that a current research program in land-locked regions of South America uses cans of anchovies to remedy the same pregnancy problems that plague North America and its inflammatory fast food diets.
at 1:36 PM

Interesting! I love your ideas.

Have you seen Guns Germs and Steel on PBS? (wonderful!) They discussed the 3 crescents of agriculture and farming and how it completely changed human history and civilization, as you just discussed.

Dr. Ayers -- you live in Idaho so where do you obtain your fish and seafood? I think fish and crustaceans ARE THE ultimate foods. They contain numerous anti-inflammatory components: taurine, betaine, vitamin A, carotenoids, etc and of course EPA DHA.

A hundred years ago, the salmon came by the millions on the Snake River (via the deepest canyon in North America, Hell's Canyon) and brought fertility to us and to high mountain lakes.

Now we just hang around interstate 84 that runs from Portland or Seattle to Salt Lake City and snag Atlantic salmon off the heavy trucks. Most of it we throw back, because it's now farm grown and rich in corn-fed omega-6s.