HIV infection and methamphetamine both cause inflammation of the brain and together they are paralyzing. 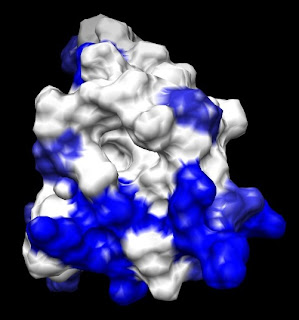 Combine methamphetamine with HIV in the brain and the result is a Parkinson’s type of paralysis.

This sounds like very morbid subject matter to pursue out of curiosity, but if you put heparin into the equation, as I always do, it all becomes very interesting.

Here are pieces to the big picture:

HIV, the AIDS virus, infects cells of the immune system and causes chronic inflammation. The inflammation causes a disruption of heparin metabolism and since heparin is a major part of the matrix that holds together the endothelial cells that line the capillaries that feed the brain, the capillaries leak, i.e. there is a leak in the blood brain barrier. HIV-infected cells can pass out of the capillaries and into the brain. Here comes the insidious part, HIV produces a protein called TAT.

I drew a graphic of TAT with the basic amino acids in blue. The sequence of this nasty little protein shows how it gets around. It is secreted from cells, attached to heparan sulfate proteoglycans. It sticks tightly to heparin (yellow and red stick figures, sticking to ribbon of TAT), because of the patches with three and four adjacent basic amino acids.

Frequently, the TAT will just be secreted and then sweep over the surface of the infected cell and be brought back into the cell on the circulating HSPG. 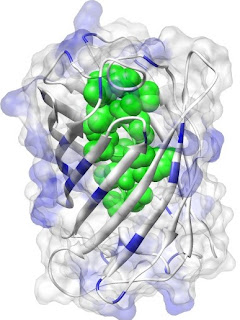 The TAT can move from the HSPGs of an HIV-infected cell to neighboring cells with HSPGs. The TAT then gets taken into the cytoplasm of the next cell. Four adjacent basic amino acids are the signal that transports a protein to the nucleus and into the nucleus. It is in the nucleus that TAT really causes trouble. The TAT can move from an infected immune cell in the brain to neurons. TAT can kill neurons and stimulate other cells to produce TNF.

Methamphetamine also causes a TNF storm in the brain. This is a quick way to start the wasting symptoms that TNF in known for -- it is also call cachexin, after the wasting process of cachexia. If methamphetamine is given to someone with neurological symptoms of HIV, then the neuropathology is further exaggerated into a Parkinson’s type of paralysis. The TNF production of both is additive.

TNF production by methamphetamine brings up the consequences of the very closely related compound amphetamine (Adderall, Dexedrine) used by children and young adults (college age) as a treatment for ADHD.

I was also interested in your article on brain-arachidonic-acid-alzheimers as my mum has both Parkinson's Disease and Dementia due to Lewy Bodies (plaques of malconformed alpha-synuclein).

In addition to 5000iu/day Vit D3 (which improved her mood and eliminated nightmarish hallucinations) and her prescribed acetylcholinesterase inhibitor, I am encouraging her to eat lots of smoked salmon sandwiches to get as much DHA into her brain as possible. This has, so far, halted the deterioration in her condition.

Is there anything else that I could try which might help?

Nige,
The Lewy bodies are an example of an amyloid. All of the amyloids make stacks of proteins with the edges of the stacks in registration. Basic amino acids on the edges bind to heparin. Heparin can cause fibers to form from synuclein. I'll try to write something on this soon.
For your mum's case, I think that the main issues would be lowering omega-6's, raising omega-3 long chains (EPA too), anti-oxidants (C, phytochemicals), glutatione support (methionine/cysteine, B12), exercise, disrupting amyloids (berberine). This isn't medical advice, but just places to look for help.
Good luck.

Thanks for replying. I'm already doing some of the things you suggested. I haven't tried berberine (Goldenseal) yet but I'll look into that.

As my mum has many mercury amalgam fillings, is there a possibility of mental retardation due to heavy metal poisoning? If so, is herbal chelation an option, or just quackery?

I am not very concerned about mercury, especially old fillings. I think that chelation is much more dangerous than mercury. From what I have read, my impression is that even the mercury accumulation from eating fish is not valid, because the selenium in the fish provides protection.
I am not convinced that any of the "toxins" that are in the common realm are actual threats. Inflammation dominates so heavily that the minor threats are only significant in people who have high levels of chronic inflammation. Take away the common sources of inflammation and most of the genetic predispositions and environmental toxins would not be problems.
Don't forget the other sources of inflammation: gut flora, oral hygiene/gum disease, fungal infections/nail fungus, etc. Use Vick's!

Do you mean Vick's Vapour Rub, or something else? If so, what does that do?

I mean Vicks Vaporub in the blue tub. I have an article on "Simple Remedies" that talks about the use of spices and the ingredients in Vicks (menthol, eukalyptol, camphor, turpenoids) for their anti-bacterial, anti-fungal, properties. People who have lived with chronic inflammation for a long time tend to have disrupted circulation in their extremities, so they have nuisance fungal infections that can contribute to inflammation. Vicks is very soothing, because in addition to knocking down obvious infections, it quickly relieves pain -- chemical acupuncture. Good luck.

Hephaestus,
I am skeptical about the use of Ritalin. According to my reading of the ADD/ADHD literature, most of the symptoms originate in chronic diet-based inflammation. Before I started on using drugs to treat these symptoms, I would make sure that my diet/lifestyle were not producing or at least contributing to the problem.

The Anti-inflammatory Diet that I outline on this blog should provide relief from many brain-based symptoms. Or from the opposite perspective, chronic inflammation causes many common mental problems. So, get your vitamin D serum measurements up in the higher part of the normal range, cut out wheat/grains starch/sugar, eliminate vegetable oils (except olive), supplement with fish oil capsules and eat plenty of meat/fish and veggies. That is an approximation of a Mediterranean diet.

Good luck and tell me how it works out.

I've tried mining your site for this particular topic but don't see what your thoughts are for how to treat a nail fungal infection?

Are antifungal medications a no-no for gut flora? I understand the nail infection could be a symptom of inflammation but how would I go about treating it wisely?

Greg,
Toe nail fungus is treated around the world with Vicks VapoRub. I prefer topical applications to systemics, because all drugs/chemicals have a broad range of side effects. Just towel down your toes thoroughly after a bath and apply the Vicks liberally to your toes, covering the nails also. I think that most people report that it is most effective if applied a couple of times a day. Some people also use Campho Phenique.

I think that Vicks is a very good first treatment for many skin problems/infections. It is anti-inflammatory, and kills many bacteria and fungi. It is also useful for inflammation of connective tissue and joints, since it triggers the cold receptors.

Thanks for the question.

Thanks! That's a great tip.. I'm going to pick up the (generic version of) vicks and give it a go.

Will give it a good amount of time and report back!

I've also heard from Robb Wolf that supplementing with S. Boulardii in particular could be important for this.. will try both.

Quote: The TNF production of both is additive. Unquote

Is the last word meant to be additive? Or addictive?

Greg Davis: I've looked at the ingredient list in "generic" Vicks (made in Mexico) and the ingredients weren't the same as in "real" Vicks.