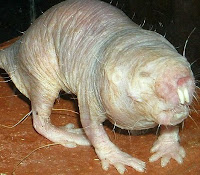 Cookie-fed humans become fat, lethargic and start to look like potatoes with legs, i.e. NMRs.  Unfortunately, unlike NMRs, humans don’t have off switches for carb glutting.  Humans evolved to run on fats, and can exploit occasional carb caches, because of an adaptive sweet tooth, but lack of evolutionary experience with gigantic carb caches, e.g. agriculture and supermarket cereal aisles, left humans maladapted for high carb diets.  We can’t pull out the HFCS intravenous line and instead become couch potatoes waiting as potential victims for giant marauding NMRs (the healthcare industry).  Fortunately, NMRs can keep the potatoes fat and feed on them indefinitely.
at 11:27 AM

Nice. There seems to be a divergence of opinion about whether humans evolved for run-them-down-until-they-collapse-from-heat-exhaustion style of hunting or the lie-in-wait-and-sprint-after-them style. I'm biased towards the former explanation as I enjoy running, which of course doesn't make me correct.

Interesting comment about SOD. It sounds like a high fat diet reduces the need for SOD production.

Art, as always your posts are fascinating. I would like to extend a warm holiday greeting to you and thank you for your great work...

I'm biased towards the former explanation as I enjoy running, which of course doesn't make me correct.
Interesting comment about SOD. It sounds like a high fat diet reduces the need for SOD production.

Sometimes, I wish that my house was edible. Happy Holiday!

Nigel,
I haven't been very attentive to my blog. I thought that your reference to house-eating referred to the cancellation of the annual Gingerbread party that we have hosted for the last 25 years. We had to cancel this year, because my mother-in-law died last week, after ten years of decline with Alzheimer's. Many feel that their memories of her have now been returned to them. It was a time of sad celebration.

Season's Greetings to all!

Sorry to hear of your loss, Dr. Ayers. May you find comfort in your memories. It has been a season of changed plans for a lot of us!

Sorry to hear about your MIL.

My comment about edible houses was in response to:-

"Mole Rats:
• live in the tubers that they eat -- sweet potatoes with legs"

Nigel,
I knew you would understand some of my thoughts and I just temporarily projected on to you my gingerbread concerns before I recalled the comments I had made about NMR habitations.

I just found this link over at Mangan's and this seems to be as good a place as any to post it here.

The real information is in this article:

Any article that mentions mTOR gets my attention. ;-)

I really am enjoying your blog. You have thought a lot about this stuff, for sure. But you don't mention anything about ferritin levels. For me, this is the one thing that ties together much of the conflicting health information. Some diets promote iron storage, others don't, and the difference is not necessarily the amount of iron in the diet. But a human being with high ferritin levels, does not process carbohydrates (on average) as well as one with low ferritin levels. Ferritin is the BIG inflammation culprit. Interestingly, the foods allowed during fasting times (seafood) don't seem to promote high ferritin levels, even though they are high in iron.

Heather,
I have to admit that I haven't thought much about ferritin. I have it filed under iron storage. Ferritin should be nothing more than an indicator of the amount of stored iron. Free iron is a big deal and storage of iron away from pathogens is essential. Free iron is also very dangerous for oxidation of cellular materials. Iron is also a key component in the production of acid in the stomach and potentially in biofilms. Then of course there is oxygen transport and storage in muscle tissue, and iron in catalase, etc.

Clearly, I don't have a good conceptualization of iron in disease development. That is one of my areas of biochemical innocence. Please feel free to point me in the right direction.

Thank you for your comments.

I read about the naked mole rats when I was in school at Univ of Michigan, which had a colony for many years.

Their digestion is so poor that they eat each other's feces to extract more nutrients the second (and third?) time around.

Before the NMR were discovered, there was a conference on social species (early 60's?). Mostly they talked about ants, bees and termites. One researcher gave a talk about "what would a mammalian social animal look like?" And he described the main characteristics of such a species -- which just happened to match the characteristics of the naked mole rat, a social mammalian, when it was later discovered!

This just floored me -- that someone could think through a theory and describe a species utterly and completely before it was discovered.

ugly this is image :( Mole rats öööö not