Each gene codes for a protein with multiple molecular actions.

I was recently reading Nigee’s Diet and Nutrition Blog and was reminded of the interesting complexity of the molecular underpinnings of physiology. Nige was discussing fat metabolism and indicated that a protein called Acylation Stimulation Protein (ASP), increased triglyceride synthesis and that ASP levels in the blood increased after a lipid-rich meal.

Since I could recall nothing about ASP, I started to examine the gene that codes for ASP and soon found that it was called C3, as in complement C3. So the lipid manipulating function is part of the repertoire of the C3 protein that also regulates the innate immune system and is sometimes referred to as an anaphylaxin, in tribute to its ability to stimulate acute inflammatory responses (anaphylactic shock).

It is not unusual for a gene to code for multiple proteins with mix-and-match domains, as a result of alternative splicing events at the mRNA processing level. That is how different classes of immunoglobulins, IgG vs. IgE, can have the same variable regions for antigen binding, but different conserved regions for binding to other parts of the immune system. In the case of complement factor C3, a single protein interacts with dozens of different proteins and is involved many different cell and tissue functions. 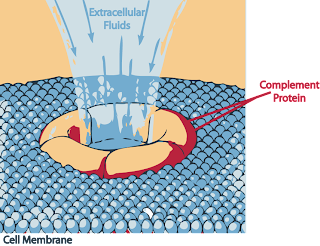 The versatility of C3 is partly a result of having multiple pairs of basic amino acids that can participate in binding to heparan sulfate proteoglycans (HSPGs) on the surface of cells. C3 and all of the other proteins of the complement cascade have heparin-binding domains. Thus, the complement proteins are all bound together on the surface of cells by the strands of heparan sulfate. This brings the proteins all together for interactions and during an immune assault the complement components are ultimately assembled into tunnels that breach invading cells.

The ASP-C3 story shows that the complement system is also wedded to lipid metabolism. Another juxtaposition of lipids with immune function is the lipid deposition in athersclerosis and also the association between the ApoE4 type of lipoprotein and susceptibility to Alzheimer’s disease. Clearly, lipid metabolism is intimately associated with degenerative and autoimmune diseases, as well as cancer.
at 5:56 PM

Thank-you for always sharing all your information on inflammation. Hope you and yours have a Happy New Years.
Anna

Thanks Art for the info. I have lots of castor oil in my cupboard. Thanks for the well wishes.
Anna